The name Cara comes from an Italian word of endearment that means "beloved". In Latin, Cara means "friend" which is also true for the Irish Gaelic origination. However, the Spanish word cara means "face" and the word kara means "dark" in Turkey. On the Isle of Man, in traditional baby naming books, Cara referred to "a songster". 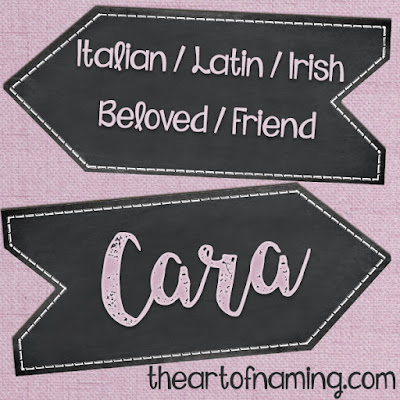 My name is Kara and I pronounce it CARE-uh. Most people that I meet initially say CAR-uh, though, which is something to ponder. Behind the Name gives three different pronunciations for Cara: KAHR-ə (English), KER-ə (English), KAH-rah (German).  Baby Names Hub has an extensive list of comments from ladies named Cara who have shared their experience with the name and its [mis]pronunciations. Many of them also mentioned how often this name can get confused for Sara, Tara, Clara, Karen or Carol. Keep that in mind if you are considering this name. Variants of this name include Kara and Karaugh; diminutives include Carina and Karyna. Cara can also be used as a short form of Caroline and Charlotte.

The name Kara wasn't used in the US until 1931 but it actually caught on a couple years earlier than Cara and has continued its popularity ride up until it finally began to decline in 2010. As of 2012, Kara is still ranked higher than Cara. Kara had 850 births and sits at #365.

Which name do you like more? What middle name would you pair with them?

I have only heard Cara said as KAH-ruh.

In Australia, I've noticed Italian-Australians tend to spell this name Cara, while if it's spelled with a K, I know they are of Anglo descent.

Such a small name, but so pretty.

I also say KAH-rah, and I say Tara TAH-rah, and that's the only way I hear other people here in Australia pronounce them. The only time I hear the other pronunciations are on American TV shows and movies :)