Our celestial girl name of the week is the underrated Portia. This is the name of one of the moons of Uranus which was named after a Shakespearean character. 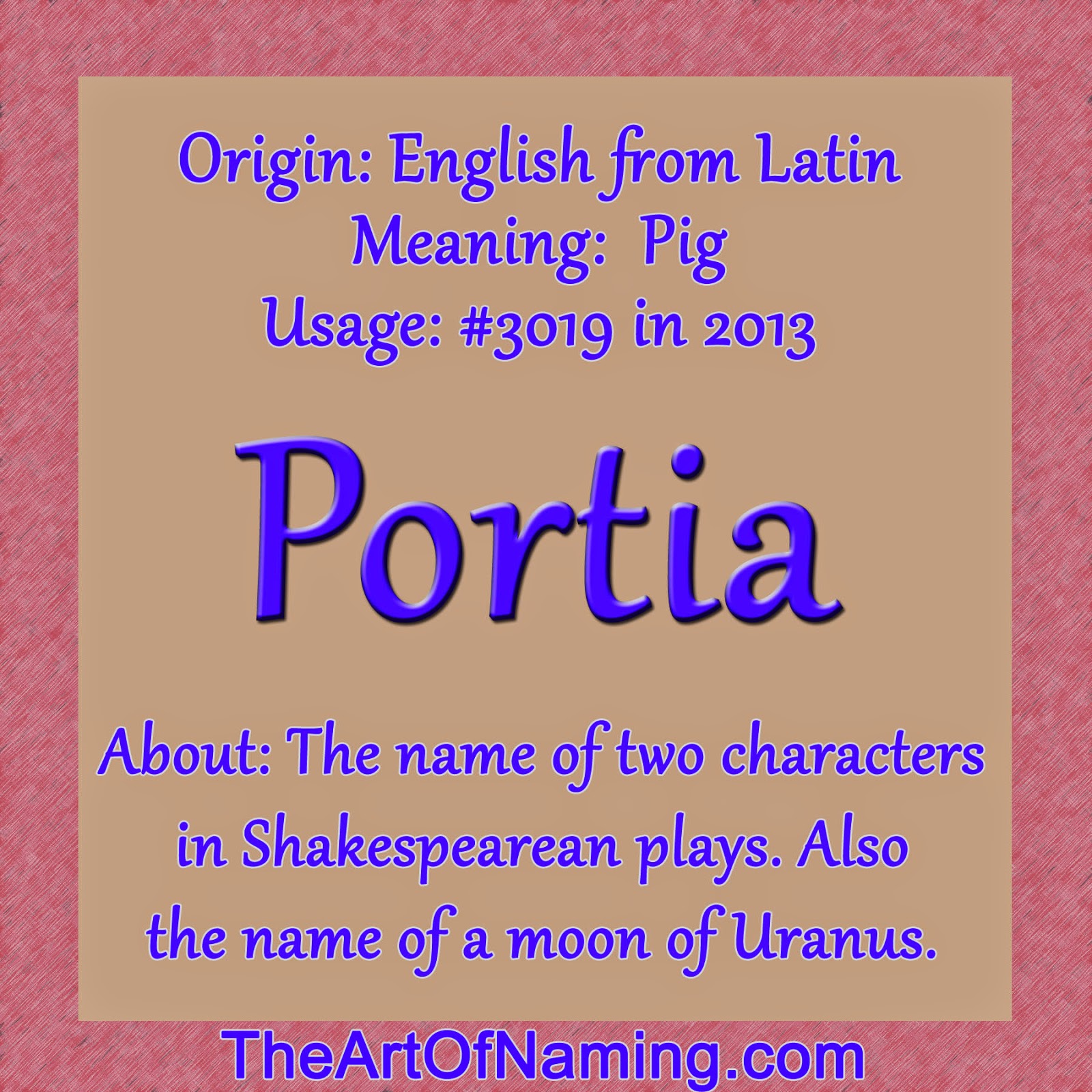 The play "The Merchant of Venice" was written by William Shakespeare in 1596 and it involved a woman named Portia who disguised herself as a man so she could defend a man named Antonio in court. There was also another Portia in Shakespeare's Julius Caesar who was based on a historical character, the wife of Brutus. The name Portia is a variant of Porcia which comes from the Roman family name Porcius.

I was a little surprised when I realized the meaning of the name, although it makes total sense based on the root of it. It has always been a somewhat classy and sophisticated name to me. As a member of the Porcius family, Portia does indeed mean "pig" from the Latin porcus. Can you see it now? If you know any other Latin-based languages, it's probably pretty obvious to you.

Today Portia isn't receiving all that much love. Usage has tapered off since around 1995. In 2013, there were only 55 Portias born for a ranking of #3019. However, this isn't necessarily bad news. This means that the name is in the sweet spot between familiar and unusual. People have heard of it but it isn't popular so your daughter would most likely be the only Portia around. Many parents like to find rare gems like this.

The most well-known namesake today is actress Portia de Rossi, the wife of Ellen DeGeneres. She was actually born as Amanda Lee Rogers but is now legally named Portia Lee James DeGeneres despite maintaining her stage name.  There is also a fictional character in The Hunger Games trilogy known as Portia.

Remember, the name Portia is not the same as the car Porsche even if they sound the same: POR-shuh. They are not related. That could be part of the reason that Portia isn't more popular since parents may not want their daughter to be associated with the posh brand. However, there are plenty of children with names of other cars like Bentley and Lexus so that may not be a valid assumption.

What do you think of the name Portia? Does the meaning of the name ruin it for you? Does the Shakespeare association make it more appealing or less?  Here are some sibling and middle name ideas:

That was a bit tricky! What would you pair with Portia?
Written by The Art of Naming at 8:00 AM

I recently came across this name spelled 'Porsche' and - no word of a lie - she had a sister called Mercedes. I like both names (Mercedes a shade more than Portia), but together?! They have an older sister called Velvet... I'm sort of mesmerised by this sibset!