Closing out Irish Week, I present to you a very Irish girl name. 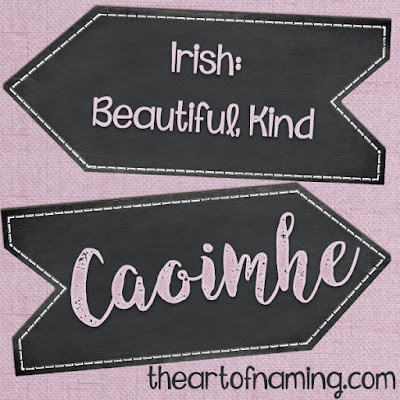 The name Caoimhe is pronounced KWEE-va and sometimes just KEE-va is accepted. It has been anglicized to produce the variants Keeva and Keavy. It comes from the Gaelic caomh which means "beautiful, gentle, kind". So while it may be difficult for the non-Irish to know how to pronounce, it definitely has a lovely meaning!  It is also used in Scotland with the same spelling, meaning and pronunciations.

According to the most recent stats on BehindTheName, Caoimhe ranks at #16 in Ireland and #35 in Northern Ireland. Nameberry confirms that this name has been consistently popular for quite a while, usually ranking in the Top 20 or so.

In the US, Caoimhe is definitely hindered by pronunciation issues. It has only been given to girls since 1996 but it has never had more than 19 births in a single year. In 2013, there were 18 births for a ranking of #6734. Revision: As of 2016, the name only had 11 births. This indicates that it won't be common any time soon.

Meanwhile, the anglicized spelling Keeva has been in use since 1968. It hasn't had regular usage though and it is by no means popular. Its biggest year was 2013 with 43 births for a ranking of #3580. It does a bit better than its Irish form but Keeva is still very rare.

Even if you're not Irish, what do you think of this name? Did you know how to pronounce it before reading this? Have you ever known someone with this name?

Here are some sibling and middle name ideas for Caoimhe:

I stuck to using plenty of original Irish spellings, but it isn't necessary. Caoimhe could also pair with anglicized Irish names or those of an English origin.  What would you pair with Caoimhe?