The brand new Social Security Administration list of the most popular baby names in 2014 is here! For the first time since 2008, Emma has reclaimed the throne, surpassing both Sophia and Olivia! On the boy's side, Noah has held onto his popularity another year even though many were speculating that #2 Liam would take it.

Here are the new Top 10 for each gender! 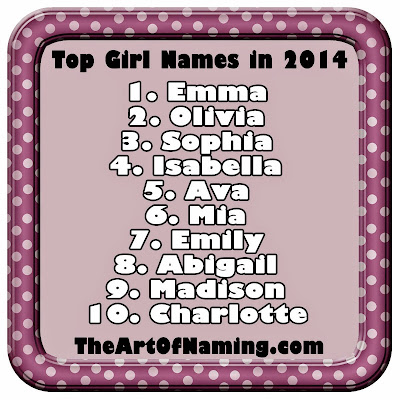 I thought Sophia would have continued her streak at #1 again this year, only possibly being unseated by Olivia. I was right about Olivia surpassing Sophia, but I didn't see Emma coming to claim the throne again after only being #1 once in 2008.  Charlotte made her way into the Top 10 by knocking Elizabeth out of the ring. With the birth of the new princess, Charlotte will probably continue to rise, potentially being #1 within the next 5 years! Any thoughts? 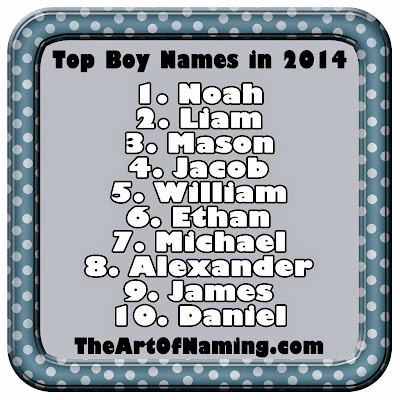 My guess was that Liam would take #1 but Noah holds on to the throne another year! Mason surpasses Jacob, and James takes Jayden's place! The names this year are all rather classic and traditional. These are solid names. I've seen some people complaining that they're all a bit boring. For example, Elijah was #11 again, so close to cracking the Top 10 for the first time and mixing things up. Maybe next year!


Here is the official list for the Top 100 Names in 2014 and their Number of Births:

What are your thoughts on this year's list?  Are you surprised by the popularity of any of these names?  Be sure to check out the Social Security Administration's full list of the Top 1000 names!

As for the whole of the Top 1000, there's a lot of names there but here are some observations I made:

Maisie has really climbed up the charts in a big way!  Emmeline has been close to joining the Top 1000 for a while now and since Emma is #1, it makes sense.  I'm happy to see Antonia and Clementine have more usage! Magdalena, Cordelia and Ariadne are pleasant surprises!

None of these boy names made huge strides but they did join the Top 1000 after not ranking in it for 2013.  They're all unique options that are gaining more familiarity! Would you use any of these?