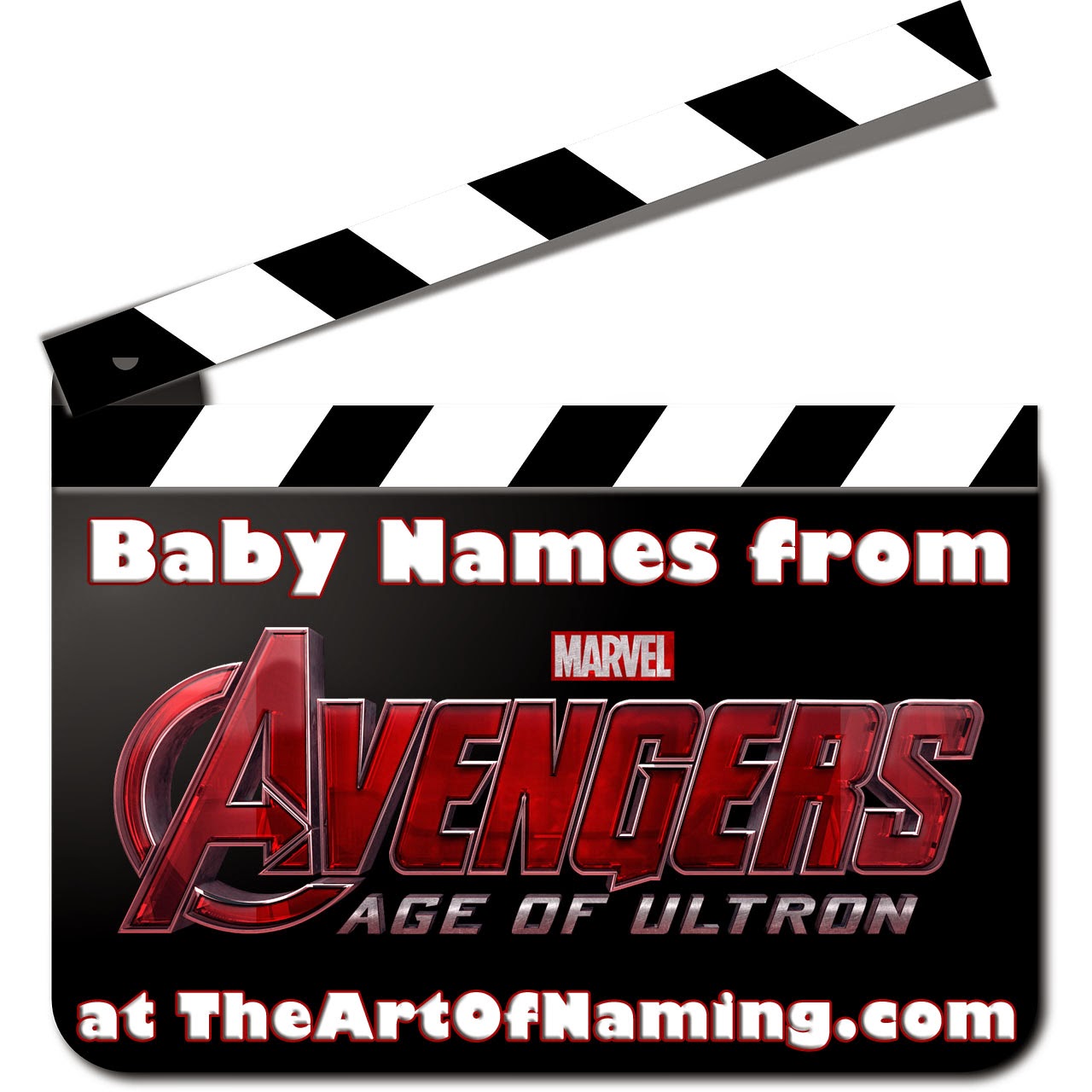 If you haven't heard, Marvel Studios's new movie Avengers: Age of Ultron will be in most theaters today, Friday May 1st! As a fan of these superhero movies, I thought we'd take a look at the names of the main characters in the film.

Let me know in the comments and polls below which name you like most and which character is your favorite! Don't forget to check out the film this weekend if you're also a fan!

The name Tony is short for Anthony. In this case, Tony definitely suits Iron Man better than the more formal long form. Both names come from the Roman Antonius which generally has an unknown meaning. Anthony ranked at #21 in 2014 and short form Tony did pretty well at #448 on its own. Which do you prefer?

The surname Stark gained usage as a first name in 2010 (but could partially be attributed to the Starks of Game of Thrones as well).  There were 20 boys named Stark in 2014. Thankfully, nobody has named their child Iron Man that I can tell, but you never know!

Steve is short for Steven which comes from Stephen and Stefan. The original name is the Greek Stephanos meaning "crown".  Captain America was born as Steven Rogers in 1920 but is mostly called Steve or "Cap". There were 418 boys named Steven in 1920. The name was much more popular from the 1940s to the 1990s; today its down to #144. Steve itself ranked at #858 in 2014.

Similarly, Roger is rather dated as a name. It had decent usage from the 1920s to the 1980s but these days it has slipped down to #584. Since 2005, there have been 132 boys named Captain. I wonder of any of those boys named Captain were given the middle name America. America is used fairly well for girls, ranking at #846 in 2014.

3. Bruce Banner (aka The Hulk)

Bruce comes from a Scottish surname taken from the Normans. It was a Top 100 name from 1932-1970, but now ranks at #401 for boys in 2014 in the US. Bruce has been rather popular in both Scotland and Australia in years past. What do you think of it?

Surname Banner has actually been given as a first name to a number of boys. 44 boys received the name between 1916 and 1944 but it wasn't heard from again until 1993. It gained regularity in 2005. In 2014, there were 30 boys named Banner. It doesn't appear as though anyone has been named Hulk, though.

Natasha is a Russian diminutive of Natalya which comes from the Late Latin name Natalia meaning "Christmas Day" from the Latin natale domini. Natasha was most popular in the US in the 1980s, peaking in '82 and '87. It has declined in usage again, ranking at #544 in 2014.

Black Widow's surname is Romanoff which hasn't been used as a first name in the US, but if you chop off the "off" and consider Roman as a name, you'll see that it has rapidly gained usage for boys. Roman ranked at #113 for boys in 2014; there were even 16 female Romans.

Clint is short for Clinton which is a surname derived from an Old English place name. It refers to a "settlement on the River Glyme" which is in Oxfordshire, England. As a given name, Clint has been in use since 1880 but has never been popular. There were 95 boys named Clint in 2014.

Barton has also been around as a name since the beginning of US records but it is even less popular. There were only 5 boys named Barton in 2014. It isn't listed as much more than an English surname, but it is said to be a diminutive of Bartholomew.

The mighty Thor is not just a comic book character, he was also prominent in Norse Mythology as the god of strength, thunder and war. Thor actually means "thunder" in Old Norse.

Pietro is the Italian form of the name Peter. It has been used in the US since 1909 but it has remained very rare. It could be a unique and interesting way to honor a Peter with a twist. There were only 25 boys given this name in 2014.

This character's surname is Maximoff which hasn't been used as a first name in the US. If we do what we did with Black Widow's surname and chop off the "off", we're left with Maxim which means "greatest". One of the many Max- names, Maxim ranked at #716 in the US in 2014.

The name Wanda is said to come from a Germanic name meaning "a Wend" that actually refers to Slavic people living in Germany. Wanda isn't a very stylish choice today but it was rather popular around 1956.  In 2014, just 22 baby girls were given this name. As for the Scarlet Witch's surname, see her twin brother Pietro's description above for that information.

Scarlet is a red color and also a type of cloth. This spelling ranked at #390 in 2014 for baby girls while the spelling Scarlett is #30. Scarlet is a lovely name once the "witch" part is dropped from this character's alias.

Fury was actually given to 5 girls in 2002 but it is not a name I'd recommend since it suggests violent anger. It does, however, make for a cool surname.

So tell me, which of the above character names do you like the most?


If you had to pick one, what is the best name of the bunch?

Just for fun: Which is your favorite as a character?
Written by The Art of Naming at 6:30 AM

I love this name, but it's a brand of margarine here, which puts me off ever using it, as people make such awful smutty jokes about margarine eg "easily spread".