Girl Name of the Week: Liesel

In honor of the post from yesterday regarding your favorite classic girl's name, I thought I'd choose a variant of the poll winner, Elizabeth.

If you are familiar with this name, you'll know that it has so many variants, diminutives and foreign versions, even whole names like Isabella and Lillian come from Elizabeth.  I searched high and low for an interesting choice and came up with Liesel. 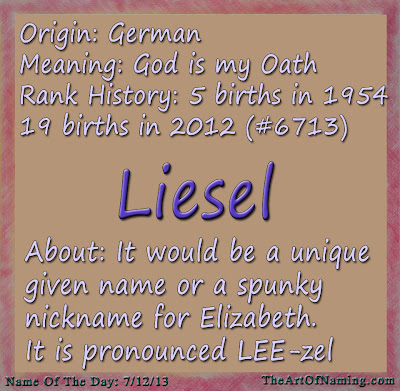 Liesel is a German Diminutive of Elisabeth (which is obviously an alternate spelling of Elizabeth.) Pronounced LEE-zel.  It is also spelled Liesl.  Elizabeth is a Hebrew name meaning "Pledged to God." For Liesel, I only seemed to find the meanings "God is my Oath" or "My God is a Vow." You get the idea.

I saw Liesel appear all over baby name forums a couple years ago and it has seemed to completely fall off the radar once again. If you don't like it as a given name, it would make for a spunky nickname for Elizabeth that is probably not used very often.

As a given name, Liesel first hit the charts in 1954 with only 5 births. It wasn't heard from again until 1963, but it has been regularly used since then. However, the most births in a single year was in 2008 with just 33 baby girls born.  You know you have a unique name when only 32 other girls in the country also have it in your birth year.

In 2012, only 19 babies received this name, proving that it is indeed very obscure. It ranked at #6713.  Liesel might even do well to honor grandma Lisa by offering a more updated sound. Lisa also comes from Elisabeth.

It seems to flow better as a first name.  But whether you're looking for a rare given name or a spunky nickname for one of the most-used names in history, Liesel is it!  What do you think?
Written by The Art of Naming at 10:30 AM

I love it! I hope to name my daughter, should I have one, Liesel! Still unsure about spelling. I kind of like "Leisel" like the Australian Olympic swimmer, but "Liesel" is more common. I have already started brainstorming middle names even though my husband and I don't plan on having kids for another 3-4 years!