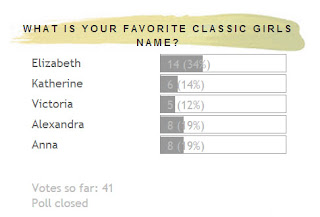 If you've seen the polls on the right side of my blog, you may have noticed that two of them have closed. I'd like to report the results of one of the polls now!

This poll asked the question: "What is your favorite classic girls name?"  I provided the following options:


Elizabeth was the clear winner of the poll! I wrote a blog article about the name Elizabeth asking why it has been a perpetually popular name since 1880. It appears to still have the winning-edge over its contemporaries!  Elizabeth has a rich history, a timeless style and a multitude of nickname options! It is a Hebrew name meaning "pledged to God," and is ranked at #10 on the US Top 1000 names chart.

Alexandra and Anna tied for 2nd place.  Alexandra is my favorite of the bunch. It is a strong but elegant Greek name meaning "Defender of the People."  With many nickname possibilities, this name remains popular at #76.

The name Anna is short and sweet. On its own, it is a Hebrew name meaning "Grace," but it is also considered a Greek or Latin version of the name Hannah. Anna has an exotic appeal that works internationally. It is currently ranked at #35.

Katherine placed next on the poll rankings and is one of the oldest and most diverse names! It is equally powerful and feminine with a royal and saintly edge. Katherine has many spellings, short forms and nicknames which makes it very adaptable to the name bearer. It is Greek meaning "pure," and is currently ranked at #64. This name is my second favorite on the list.

Lastly, Victoria! Queen Victoria's name was responsible for classifying an entire era that epitomizes gentility and refinement. It is Latin meaning "victory," and is currently ranked at #28. I would personally like this name better if I didn't dislike the nickname "Vicky" so much. Perhaps that is one reason this classic name ranked last on the poll.

Which did you vote for? What are your favorite nicknames for each name?  Let me know in the comments below and check out the results of the Classic Boy Name poll from Monday's post!  Stay tuned for tomorrow's Girl Name of the Week! I'll be using a diminutive of one of the names above!
Written by The Art of Naming at 10:30 AM