Boy Name of the Week: Flynn

In honor of my "One-Syllable Boy Names" post from yesterday, I chose a one-syllable name to feature.  This Boy Name of the Week has had a very sharp increase in usage from one year to the next. The name is Flynn. 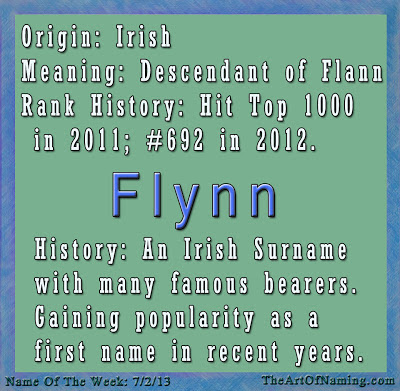 Actor Orlando Bloom and his model wife Miranda Kerr recently named their son Flynn, which may or may not have had a lasting influence.

Flynn is an Irish surname. It is an anglicized form of "Ó Floinn" meaning "descendant of Flann." It is also said to mean "son of the red-haired one."  Flynn has a casual charm to it with a very handsome appeal.

In 2012, the name ranked #692 which is its highest ranking ever!  It originally appeared on US babies in 1913 when 5 of them were born. It remained very sporadically used with 5 babies here, none there, 7 here, etc. until it began ranking every year in the 50's. Only in the past decade has it gained popularity.


Since Flynn is originally a surname, there are many famous people who have the last name Flynn. I'd like to see this name used more regularly in the first name spot.

However, there is a slight downside by association. The infamous Errol Flynn wore it as a surname and may be the most popular Flynn. Born in 1909, he was an Australian-American actor known for his romantic swashbuckler roles as well as his over-the-top playboy lifestyle. There were some allegations of sexual misconduct against him before and after his early death.

The phrase "In like Flynn" is a slang phrase meaning "having achieved a goal or gained access as desired". However, some believe it was in reference to Errol Flynn because of his reputation for womanizing.  He died in 1959 so it has been a long time since his name was in public thought.

Does this bother you or would you use Flynn despite the association?

What do you think of the name Flynn? Do you prefer one of the Finn variants instead? Let me know!

I've really gotten keen on Irish names the last few years and I love Flynn. I'll admit, it was the Disney movie that first brought it to my attention!

Flynn is the most profound expression of male qualities I have ever witnessed. Flynn's are gods!! They will forever draw respect and true wonder. They are unique in all that they aspire to! I may be a little biased though, I am named Flynn!!