They say that it takes 100 years for names to come back into fashion. They aren't wrong.

When you think about all of the names that are currently at the top of the charts (or rising quickly) how many of them were previously considered "Grandma" names? 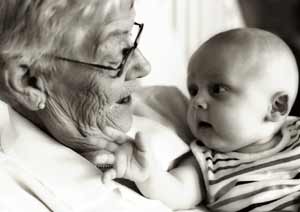 Perhaps these names are now being used to honor those grandparents. Or maybe those names now belong to the great-grandparents of current baby-namers and aren't well-known or thought of as old. Just like fashion trends, names have a way of coming back around and seeming fresh again. The 100 year rule is real!

To prove that, here are some names that saw popularity spikes in the 1915-1925 range. These same names have begun gaining popularity since 2010 (and sometimes earlier because of those parents ahead of the trend.)

We can only assume that these names will continue to climb our modern day charts and hit their peaks around the 100-years-later mark and then decline again.

Keep in mind that these names have not had any popularity spikes between then and now.

Here are some names that also had their spike around 1920 but haven't yet spiked today. These names are slowly inching upward per the 100 year rule. If you use one of these now, you'll be ahead of any possible spikes in the near future and I think they're coming.

What do you think of these two lists? Would you use any of these names and be part of the trend? Or does this information make you immediately avoid these names so that your daughter doesn't have a popular name in the coming years?  Let me know!
Written by The Art of Naming at 9:00 AM