The Prince of Cambridge Has A Name!

The name of the Prince of Cambridge, the third in line to the throne of England, has finally been announced! 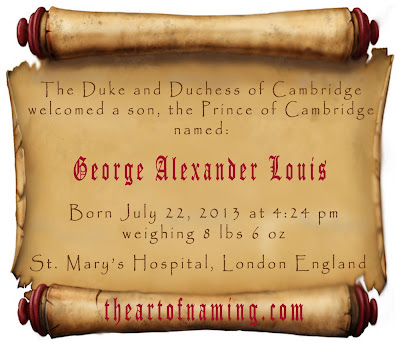 What do you think of this Royal Baby Name? Is it fitting for a future King?  I think it is extremely strong and handsome. Perfect for this little Prince.  George was pretty much a sure thing and everyone was betting on it. Alexander is my own son's middle name and one of my very favorites. It wasn't on anyone's radar as an option. Louis is one of Prince William's middle names!

Here's the breakdown of what each of the names mean and who else has worn these names in the Royal Family:

George is a Greek name meaning "Farmer." The fact that they chose it is probably meant to reflect the humbleness of a farmer so that the Prince can always be down-to-earth and a more compassionate ruler. It is a strong name that is both royal and saintly. It was worn by the King of Britain for 116 years straight!  Most notably, George directly honors the most recent King George VI who was Queen Elizabeth's father. His full name was Albert "Bertie" Frederick Arthur George and he died in 1952. George is also one of the middle names of Grandpa Charles, the Prince of Wales.

Alexander is a Greek name meaning "Defender of Man" and puts a huge responsibility on this little prince already. In addition to giving him the humility and meekness of a farmer, he is meant to defend those around him with honor. This may be a nod to Queen Victoria whose real first name was Alexandrina.  And of course, the baby's Great-Grandmother, HRH Queen Elizabeth's middle name is Alexandra. There haven't been any King Alexanders in England.

Louis is a German and French name meaning "Renowned Warrior" which is another big meaning for a little prince. He is meant to be strong and brave and, combined with the other two meanings, protect his people. There was one King Louis who lived from 1187-1226 and had 13 children! Otherwise, this name is more frequently used in the middle name spot.  Prince William has this as a middle name and so does his uncle Prince Edward.


What do you think of this royal name for our new little prince? Did you guess correctly? Do you like it?
Written by The Art of Naming at 12:11 PM