Boy Name of the Week: Benedict

The Boy Name of the Week is the strong and bold Benedict. I prefer this choice over the more-common Benjamin and Bennett. 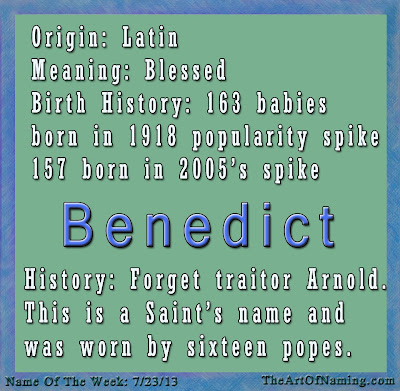 Benedict is a Latin name meaning "blessed." It is also the name of Saint Benedict, an Italian Monk who formed the Benedictine Order in the 6th century. Additionally, a whopping sixteen popes have worn the name. Benedict hit England in the 12th century and became insanely popular.

The alternate spelling, Benedick, probably won't fly for a modern baby but it was used for a character in the Shakespeare piece Much Ado About Nothing.

Of course there will always be that link to the infamous traitor Benedict Arnold, but he died in 1801 so I'm willing to look past that now, are you?

To switch gears, a modern day Benedict is a new rising star. The British stage, film and TV actor named Benedict Cumberbatch is gaining popularity in the States now.

Let's look at the popularity stats of Benedict. It recently ranked at #420 in England/Wales, but the US has not flocked to this name yet. Its highest naming spike occurred in 1918 when 163 boys were given the name. It leveled out with minimal usage until another spike occurred in 2005 with 157 births which coincides with Pope Benedict taking over. However, usage has once again declined with a mere 86 baby Benedicts born in 2012 for a ranking of #1736.
But you know what? I would say this is a gem of a name! It is familiar yet rarely used. It has "Ben" as a great, simple nickname for those wanting to tone down the in-your-face strength of Benedict.  It is clearly very handsome too! I'd recommend this name for parents who are a bit bold and want to find something unique without resorting to odd spellings. Benny or Benno are cute alternates to the nickname Ben. You might even be able to get away with Ned since it's in the spelling and even Eddy. ;)

I'd pair Benedict with something short, sweet and traditional like James, John or Lucas. The only possible issue with the name is the teasing potential of "you've been a dick" or anything along those lines. If that bothers you and you still love the name, something like James Benedict would be so insanely handsome and it would tuck Benedict safely into the middle name spot to avoid complications.  What do you think of this moniker?