Boy Name of the Week: Felix

The Boy's Name of the Week is the bold and playful Felix.  Beyond "Felix the Cat," this is a Latin name that means "happy and fortunate".

Felix has been the name of four popes and a whopping 67 saints! A biblical Felix was the governor of Judea who imprisoned Saint Paul.  In Ancient Roman times, General Sulla adopted the name Felix because he felt as though the gods blessed him with luck and fortune. 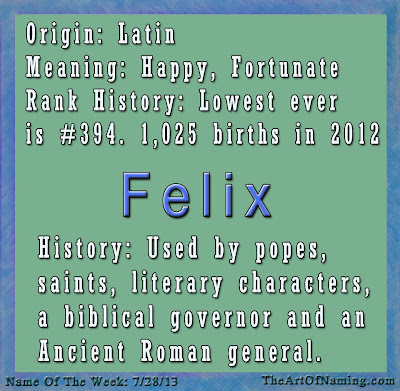 Felix has been all over various literature and films, too many to list. There are also many modern day examples and a couple celebrity babies.

If you zoom out and look internationally, the name Felix is very diverse! It works well in Spanish, German, Austrian, Russian and Polish. It is also quite popular in England/Wales, Denmark, France, The Netherlands, Norway and Sweden. Here in the U.S., it is definitely picking up steam!

Felix peaked in 1918, declined in usage, and then was moderately used through the 50s and 60s.  Usage increased again around 1990 and Felix hit its modern peak in 2011.   Since 1880, it has been above #394 on the Top 1000 chart, but yet it feels so very under-the-radar still.
I think this name has potential to continue climbing the charts. It is a simple name with one possible spelling and it is unique but antique enough to be familiar. The fact that it is Latin and has such a wonderful meaning will boost the name in parents' eyes, and that X on the end gives it a stylish vibe.

What do you think of the name Felix? Is it on your list?

As a Middle Name:
Milo Felix
Oscar Felix
Charles Felix
Brody Felix
Henry Felix
Written by The Art of Naming at 9:00 AM