"Love" Names for Your Mini-Valentine

When I was doing research for "romantic" names relating to Valentine's Day, the range of applicable names was rather diverse.

There are the cutesy names that relate to gifts and love such as the following for girls: 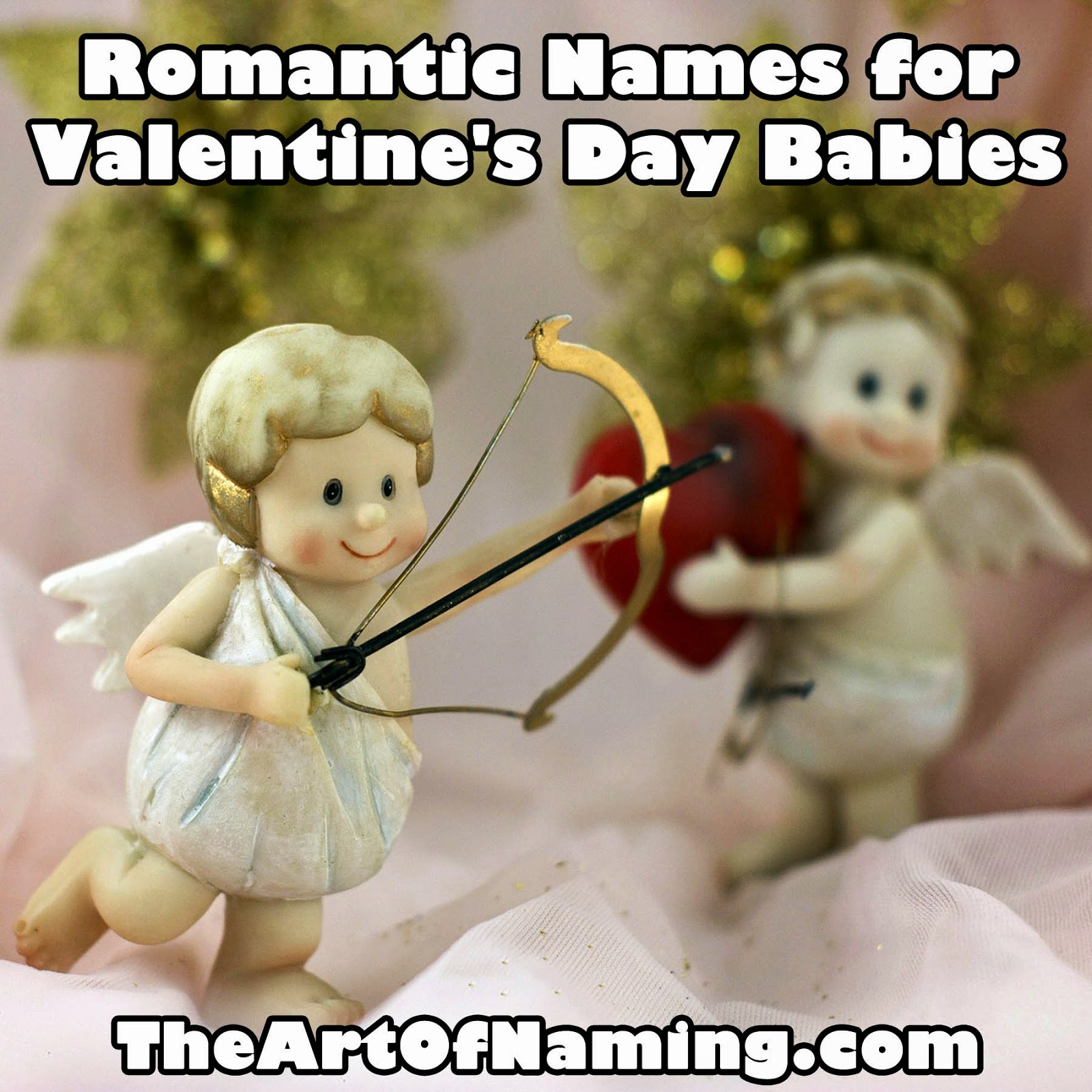 ...and these for boys:
Card
Red
Teddy

But honestly, only a few of these actually make for a good, solid name.  Since today is generally a day of love, I instead decided to pick a few names that relate to love through their meanings or associations.

Valentine/Valentina/Valentino
Of course this name has to be first on the list. They honor St. Valentine who was a 3rd century Roman saint. He came to be associated with love, romance and devotion. The name itself means "strong, vigourous, healthy".

Amabel
This medieval choice comes from a Late Latin name meaning "loveable". Names like Annabelle, Arabella and Mabel are related. Amabel is a rare but beautiful name with a great meaning!

Amy/Aimée
Derived from the Old French name Amée, both spellings of Amy mean "beloved". Other related names include Amata and Amada.

Carys
A Welsh girl name that straight up means "love". It can also be spelled Cerys but both spellings are very rare in the US.

Desiree
Get right to the point with this lovely name that is taken directly from the French word meaning "desired". It is currently on a popularity decline but still ranks at #629 in 2013.

Esme
An Old French name, Esme means "esteemed" or "loved".  It is also sometimes associated with emeralds which would make for a lovely Valentine's Day gift.

Evelyn/Aveline/Evalina/Eileen
These names are all related to one another, coming from the ancient Germanic name Avila. They are said to mean "desired". Who doesn't want to feel desired, especially on Valentine's Day? Such lovely choices for a baby born today.

Freya
The Norse goddess of love and beauty, (but also of war and death), has a lovely name that is starting to gain some popularity in the US, ranking at #908 in 2013. It has done well in Britain since the early 2000s, too.

Venus/Aphrodite
With Venus being Roman and Aphrodite being Greek, these are the goddesses of love and sexual desire. While these associations may be a bit mature for a baby, they are lovely for a woman. Venus may be the easier-to-live-with name of the two though.

-
Amadeus
While it doesn't have a romantic meaning, Amadeus is partially derived from the Latin amare meaning "to love" (with deus applying the love toward God). Other Am- names that are said to have something to do with love include Amadea, Amara, Amy and the male Amias/Amyas.

Carwyn
This is a boy's name that means "blessed love" in Welsh. With a wonderful meaning like that, you can't go wrong! Even better, it's extremely rare in the US. It's only been used since 2012 for a total of 18 babies. Could be a cool alternative to similar sounding names like Carson or Carter.

David
This is a classic name with historical roots, both biblical and royal. It is a Hebrew name meaning "beloved". As of 2013, it still ranks at #18 in the US.

Erasmus
If you're looking a rare name, this is it. It's only had a total of 105 recorded births in the US since 1880. Erasmus comes from a Greek word meaning "beloved".

Eros/Cupid
While using Cupid as a baby name may be a little over-the-top, his Greek counterpart Eros  could actually make for a cool name! Eros is portrayed as the son of Aphrodite, the goddess of love, and is the god of love, desire, attraction and affection in his own right. Cupid means "desire" and Eros means "love".

There are more names with similar meanings if you'd like to search more.

In my research, I also found many sites suggesting the use of the names of famous romantic couples, most of which were pulled from Shakespearean plays. But why stop at just Shakespearean couples? Plenty of romantic couples can be found throughout literature and history, even pop-culture! If you went that route in search of romantic baby names, you could add the following to the list, just to name a few:

There are countless more that could be added! However, while these couples may be romantic, not all of them have good stories or happy endings so read up on your knowledge of them before committing the name to the baby's birth certificate. Also, giving one of the above sets of names to boy/girl twins or even siblings might be a little strange since they are supposed to be "romantic" but I won't judge.

This is very useful

These names are so useful for a school project.

Wow. I used this for my research report and my teacher said the names I chose were magnificent, thank you!

You're welcome! Glad to help!