Name of the Day: Arlo

I'm a fan of names that are somewhat under the radar but still have a solid history. I like names that were popular in the 1880's-1920's and never heard from again until modern times. I have been focusing on these for my "Name of the Day" report, and am doing so again today with the name Arlo. 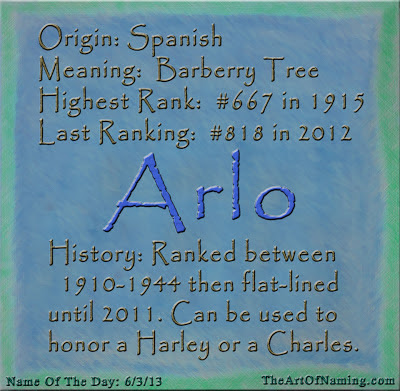 Primarily a boy's name, Arlo is short, sweet and full of character. Two celebrities recently named their sons Arlo, (Natasha Kaplinsky in 2008, and Toni Collette in 2011). Johnny Knoxville named his daughter Arlo in 2011, which suddenly throws this name into the "possibly unisex" category. (Popular girls names Harlow and Marlowe are similar, which may be the reason for Arlo going female.) It will always be a boy name in my mind since it has never ranked for a girl.

Of Spanish origin, Arlo means "barberry tree", so it also puts it into the "nature name" category, which can sometimes be tricky for boys. Along those lines, Arlo would be a fascinating sibling for Jasper and Dahlia.

If you are looking to honor a relative, Arlo has also been known to be a variation of the following names: Harlow/Harley, Carlos/Charles, Arlene.  It could also be spelled Arlow, Arlowe, or Arrlo.  Because of this, the meaning of Arlo may be more relative to these other names. But as its own name, Arlo is indeed Spanish for Barberry tree.

What do you think of this unique moniker? Would you use it for your son? Or do you see it better suited for a girl?