Name of the Day: Helena

Today's Name of the Day is Helena. This name is the Latin form of the name Helen, which has a ton of history. Most notably, there is Helen of Troy who was the daughter of Zeus and Leda in Greek mythology. She was kidnapped by Paris and was the cause of the great Trojan War. And a more modern example was Helen Keller who overcame being blind and deaf.

While Helen is a strong name, I prefer the girlier Helena. I like to pronounce it Hel-AY-na as opposed to Hel-EN-ah, but both are pretty! 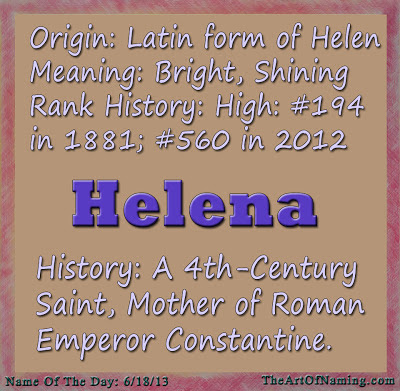 This Latin name means "bright, shining one" which is a lovely meaning. Helena was used for two characters in Shakespeare's works, one in "All's Well That Ends Well" and one in "A Midsummer's Night Dream."  Another Helena was a 4th-century saint who was the mother of the Roman emperor Constantine.

Still, if you consider the 200-500 or so babies born every year named Helena, this name is not very popular when compared to names that spike up to 10,000+ births a year.

I would say this is is a very lovely, classic choice that is both familiar but not overly used. What do you think of Helena? How do you pronounce it? Do you prefer Helen or Ellen instead?  Let me know below!