Girl Name of the Week: Magnolia

Since I posted a list of tree and flower names for girls, I thought I would pick my favorite from the bunch for the Girl Name of the Week! I chose the lovely Magnolia. 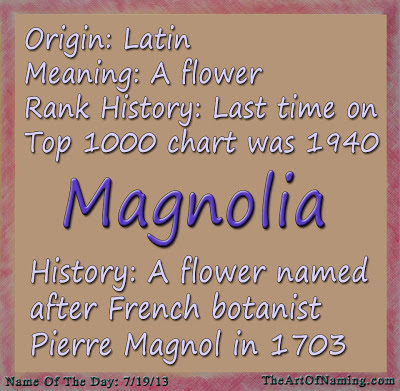 This is a Latin flower name that gained a sweet, "Southern Belle" image from a character in the iconic novel and musical Showboat by Edna Ferber. If you've never heard of it, don't feel bad. The novel was written in 1926 and the musical was on Broadway in 1927. However there were three films produced since then.

The Magnolia flower was originally named in 1703 after a French botanist named Pierre Magnol who lived from 1638-1715 and contributed much to the way flowers are classified today.

In modern times, Magnolia as a name has come along on the latest wave of botanical names for girls. She began gaining more popularity around 2006. However, Magnolia has not cracked the Top 1000 chart since 1940. In 2012, Magnolia ranked in at #1123 with 218 births which is a fair amount considering she ranked at #493 in 1905 with just 47 births. (Oh how times have changed in the naming world!)

The highest popularity peak, besides 2012, occurred in 1921 when there were 150 baby girls named Magnolia. Random fact: apparently the only year that there weren't at least 5 births since 1880 was my birth year, 1987. Strange! I should have been named Magnolia just to possibly add to the stats! And also because it is beautiful and I love it!

The first time I heard this name on someone was when I was watching the show Hart of Dixie and saw a blonde, southern belle teen named Magnolia Breeland. Because of this, I'm inclined to want to pair Magnolia with Breanne or Brielle or Brynn. (Also, her sister's name is Lemon!)

I'd avoid other flower names like Rose or Lily for a sister or as a middle name. Cute nicknames include Maggie, Noa, Nollie, Nola and Lia.

What would you pair it with? What do you think of this lovely botanical name? Do you prefer another? Let me know!
Written by The Art of Naming at 10:30 AM