Boy Name of the Week: Alfie

I decided to choose the Name of the Week from the Top 1000 baby names chart from England/Wales in 2012. My choice is #7, Alfie.  England is big on nickname names which basically means names that end with -ie and have a longer, "proper form" as well.  In this case, Alfie comes from the name Alfred. 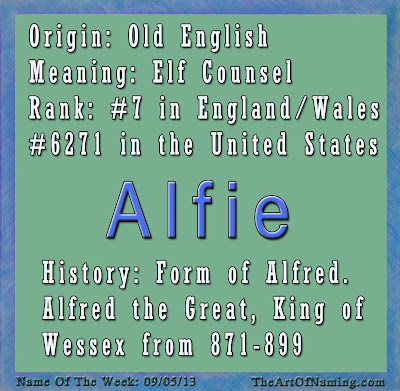 Derived from Old English, Alfred is composed of elements that mean "Elf Counsel".  This name dates back as far as Alfred the Great in the 9th-century, and probably farther. He was the King of Wessex who notoriously fought against the Danes living in northeastern England. Beyond that, he was a scholar who translated many Latin books into Old English.

The name Alfred became very rare by the end of the middle ages and wasn't revived until the 18th century. Another famous Alfred was Lord Tennyson, a British poet who lived from 1809-1892.

I would use the combo Alfie James because I think its adorable.  Other ideas include Alfie Richmond, Alfie Theodore, Alfie Sebastian and Alfie Thomas.

What do you think? Are you a fan of these nickname names? Let me know what you think in the comments below!

As a Middle Name:
Nathan Alfie
Wilfred Alfie
Vincent Alfie
William Alfie
Daniel Alfie
Written by The Art of Naming at 9:00 AM