This name comes from our list of names ending with the letters "-ky". If you saw that article, you know that this is a very limited club of names, but there are definitely some cool choices. One of the coolest options from the list is Rocky. 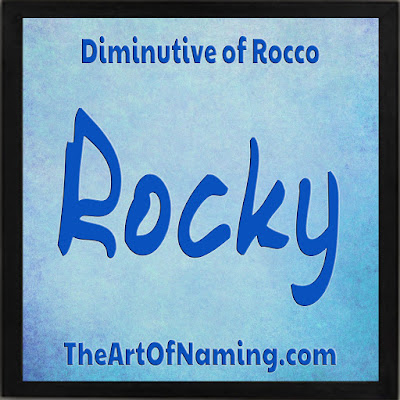 Rocky is given as a full name, but it is also treated as more of a nickname. It could be considered a diminutive of the name Rocco which is a Germanic name from the element hrok which means "rest". Rocco is the patron saint of the sick.

However, as you may know, Rocky is not so much a saint as a famous fictional boxer. The Rocky franchise of movies starring Sylvester Stallone as Rocky began in 1976 and is possibly the most well-known association with this name. Another association comes from the old cartoons "The Bullwinkle Show" and "Rocky and His Friends" both of which aired in the 1960s. These featured a flying squirrel named Rocky and his moose pal experiencing a variety of adventures. Interestingly, Rocky was short for "Rocket", which would definitely be a bold choice for a baby name today.

If not, perhaps it would be an appealing choice for your child. If so, here are some ideas for middle names and sibling names for Rocky if you were to use it:

These may be a bit unconventional and over-the-top, but they work if you strictly remain in the same tough, nicknamey vein as Rocky. What would YOU pair with Rocky?
Written by The Art of Naming at 3:30 AM