Spanish baby-naming traditions vary slightly from country to country, but overall, they are very similar. These customs appear in Spain, Mexico, certain islands in the Caribbean, Central America, and South America. The latter four are grouped together and called "Hispanic America." 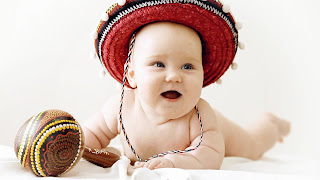 For example, if a man named Alberto Sanchez Hernandez and a woman named Maria Ruiz Gonzales have a son named Eduardo, the child's name would most likely be Eduardo Sanchez Ruiz.

Hispanic American naming customs are very similar to the traditions that are practiced in Spain. Many of them do have the "composite first name" which is basically what Americans think of as a first and a middle. They continue the surname tradition, using one paternal and one maternal.  They do not have "middle names."

In the past, traditions varied a bit. I'm sure you have heard of Spanish names that are incredibly long. For example, there is the Saint Teresa de los Andes whose real name is Juana Enriqueta Josefina de los Sagrados Corazones Fernández del Solar.

Sometimes "de" or "del" or "de los/las" will be used in a name. Like the example above, it denotes a geographical origin of the individual or of their ancestors; for example, Juan Ponce de Leon.

Other instances where this occurs include "martial conjunctions" where the wife drops her maternal surname and adds her husband's paternal surname.  Ángela López Sáenz, as wife of Tomás Portillo Blanco, would become Ángela López de Portillo.  However, this is very frowned upon in many places since it is custom for a woman to keep her birth name.

In Uruguay, it is the law to use two surnames. In Argentina, the use of two surnames is legally accepted, but often only the paternal surname is registered in the birth records, (or the maternal if there is no recognized father.) So it is common in Argentina to refer to someone by a single surname. Of course there are always special exceptions.

This common 2-surname tradition tends to get confusing when applied in the United States because laws in the US operate on the assumption that everyone has a first/middle/last name. The pattern of first/last/last makes documents and paperwork very difficult since the US sometimes tries to make the paternal surname a "middle name" and the maternal surname a "last name", which is incorrect since the officially recognized last name in Hispanic culture is usually the first one, the paternal surname, and the maternal one is ignored.

Let's talk about first names now. Parents are typically allowed to choose anything, but most will opt to honor a relative or a saint. The first part of the composite first name generally reflects the child's gender but the second part may not. For example, a boy named Jose Maria to honor Saint Mary. I have a female ancestor in my family tree named Maria de Jesus. This is rather common.

Most girls are given the first name Maria because of strong belief and respect for the Virgin Mary. Many Marias have the second part of the first name corresponding to a religious concept like Maria de la Luz (Mary of the light), but in daily life, many women will drop the Maria prefix and use the suffix portion as a social name, even though the whole thing is their legal name on paper. So she may go by Luz primarily, however addressing her as Maria is accepted.  Sometimes nicknames or diminutives or what we might call a "smoosh name" is used, such as Marisol for "Maria (de la) Soledad. These smoosh names are rather common for both genders, whether it be a given name or strictly a familial nick name.

If the girl's name includes a masculine honor name as the suffix, like Maria Jose in honor of Saint Joseph, she may be informally called Marijose, Majo, Josefina, Fina, Pepa, Pepita or Marise.  For a boy named Jose Maria, Maria is often abbreviated. So he would be Jose M. Reyes or Jose Ma. Reyes.

The Civil Registry will record the child's name as a forename and two surnames, however a child can receive an entirely different baptism name like Pedro Jose Froilan de Todos los Santos. This type of name has no legal significance and is generally only used families of royalty or nobility.

I'm sure there is so much more information that could be addressed about the customs of Spanish and Latino baby names, but I think I will stop there! I am of Hispanic descent but the lineage has been Americanized that we do not follow these customs. I have an Irish maiden name, so I received a regular first, middle and last, none of which are considered Spanish. However, my husband's name is technically first/mother's maiden/father's surname, but with American customs applied, his mother's maiden name is basically considered his middle name.

What about your family? Traditions seem to get a bit jumbled up in the US. If you have Hispanic roots, do you have a traditional Latin name or an Americanized one?  Let me know in the comments below!

If you are looking for first names that generally work well on Hispanic babies, take a look at my lists page. I have made long lists for both boys and girls!

[Note, if I have gotten any information incorrect, please let me know so I can adjust it.]