7 Names That Start With Ev- 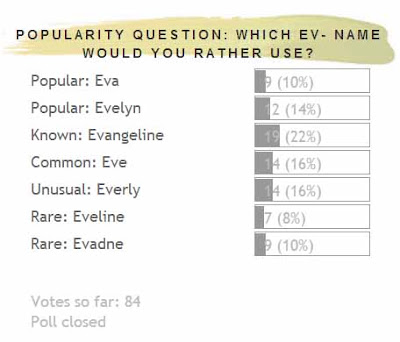 Once again, a poll on the sidebar of the blog has come to a close. A whopping 84 votes were cast for these lovely names that start with Ev-.  Because I couldn't help myself, I ended up choosing 7 names for the poll which made the votes spread a little thin, but there was definitely a clear favorite. Here are the results:

22% of you Name-Artists out there favor the name Evangeline the most!  It is toward the middle of the pack as far as popularity is concerned. Here is how each of the names ranked on the US Top 1000 chart in 2012:

Let's find out more about these names!

Evelyn is an English surname that comes from the name Aveline. It was originally common for boys in the 17th century but because of similar feminine names like Evelina, this name is all-girl now.
Eva is the Latinate form of Eve, meaning "life". It is also a variant of the Russian Yeva.  This name works well internationally. It has ranked well in 17 countries, even hitting #1 in Slovenia in 2011.

Evangeline is a Greek name that means "good news".  There is an epic poem entitled "Evangeline" that was written in 1847 by Henry Wadsworth Longfellow.

Eve comes from the Hebrew words "Chawah" which means "to breathe" and "Chayah" which means "to live". Eve was the first female human as written in the Book of Genesis in the bible. This name was used in the middle ages and gained more popularity in the 19th century.

Everly has been used on boys because of its association with the Everly Brothers, but nowadays it is very female. It is English meaning "wild boar in the woodland clearing" which is more of a boyish meaning to me!

Eveline is my favorite of the bunch. It is a variant of Evelina which comes from Aveline which is derived from Germanic elements possibly meaning "desired". It is very rarely used but has been around since the 1880s in the US.

Evadne surprised me in how unused it is. I've seen it around and its one of my favorite Greek names, but it hasn't been used at all since 1992-1994, and before that 1962. I suppose she does have a tragic story in Greek legend.

Which if these is your favorite?
Written by The Art of Naming at 9:00 AM