Boy Name of the Week: Kato

This week we will be focusing on African Names! I chose a handsome boy name that comes from Uganda.

Kato is a great example of the way African names are used. It means "second of twins" which clearly describes the circumstances at the time of the birth. Perhaps his twin brother would be named Babirye or Isingoma which both mean "first of twins."  I will be discussing African Naming traditions more thoroughly on Wednesday! 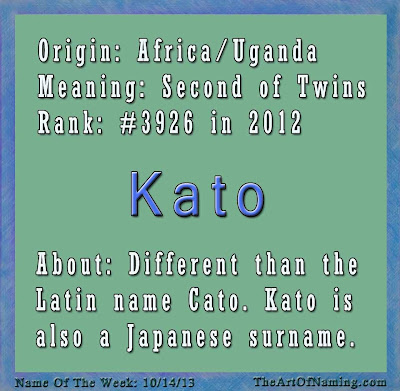 I'd say that it is not unfamiliar but it is definitely rare!  Somewhat-famous Katos that you may have heard of are most likely not claiming this African meaning and origin. In fact, a couple of the men named Kato use it as a nickname or an alias. It is not their real name, but rather, it is inspired by a fictional character.

There is a Korean-American music producer who goes by Kato, but his real name is Christopher Ju. And perhaps you remember Kato Kaelin who was a [rather untrustworthy] witness in the OJ Simpson murder trial. His real name is Brian Jerard Kaelin. The only reason either of these two men have ever been called Kato is because they are big fans of the character named Kato who was played by Bruce Lee in the TV series "The Green Hornet."

"Wait a minute!" you say. "The character in that show was Asian, not African!"  Yes he was. Kato is also a very common Japanese surname that is comprised of characters meaning "to add/increase" and "wisteria".  I think the majority of people who use Kato today are either inspired by the Green Hornet's sidekick, or they are using a "different spelling" for the aforementioned Cato.

However, I am not featuring those names. The Name of the Week is the African Kato. I chose it because it was the most familiar-sounding African name that I could find, and it probably only sounds familiar because of its usage in Japan and elsewhere. Wasn't there a Cato in the Hunger Games?

Well anyway, what do you think of Kato? Do you know anyone with this name, and if so, what inspired it? Let me know in the comments below!
Written by The Art of Naming at 9:00 AM