Name of the Week: Esther

The Name of the Week is the biblical girl's name Esther.  Esther is considered a Persian name that means "star" and is related to names like Estee and Hester. However, as an alternative, the origin could possibly come from the goddess name Ishtar. 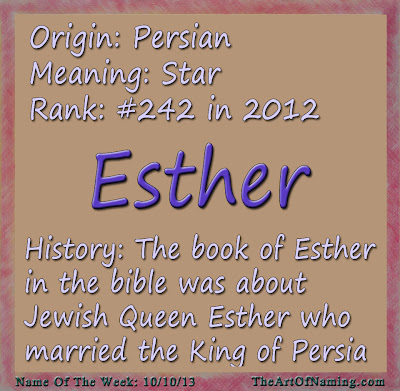 In the Old Testament, Queen Esther was the focus of the Book of Esther. She was the Jewish wife of the King of Persia who is known for saving the Jews from being killed.  Esther's original Hebrew name was Haddassah.

In American history, President Grover Cleveland named his daughter Esther in 1893 which gave the name a popularity boost. Esther jumped from 824 births in 1892 to 1,382 births in 1893. It continued to gain popularity over the next couple decades, peaking at 6,575 births in 1918 (#38). The name declined in usage after that, but has never dipped lower than #348.

This is a lovely name with a vintage feel to it since it had such popularity in the 1920s. It could very well join the other names that fit the "100 year rule" and see a boost in usage in the coming years. It fits right in with Edith.

I would pair something equally feminine and lovely with it.  What would you pair with it? What do you think of the name overall? Let me know in the comments below!

As a Middle Name:
Leona Esther
Vivian Esther
Genevieve Esther
Lillian Esther
June Esther
Written by The Art of Naming at 9:00 AM