Name of the Week: Simeon

The Name of the Week is the biblical boy's name Simeon. Its cuter than Simon but follows the coolness of Gideon. It is pronounced SIM-ee-ən. 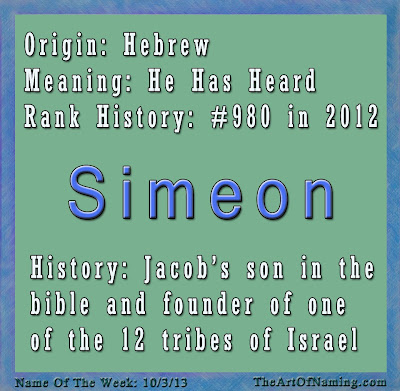 It comes from the Hebrew name שִׁמְעוֹן Shim'on which means "he has heard" or "God is listening."  In the Old Testament, Simeon was the second some of Jacob and one of the ancestors of the 12 tribes of Israel. In the New Testament, Simeon was a man who blessed Jesus as a newborn.  There was also a powerful ruler in Bulgaria who bore this name in the 10th-century. Simeon has also been a popular name for saints.

You wouldn't necessarily have to pair this name with another biblical choice. What would you pair with it? What do you think of the name overall? Let me know in the comments below!