The Name of the Week is my favorite from the list of Bird-Inspired names. I took it from the Peregrine Falcon, but the meaning of Peregrine doesn't actually have anything to do with the bird.

This is a name that is rarely used in the US because many have viewed it as an eccentric and extravagant name. However it has been considered elegant and even aristocratic in England. 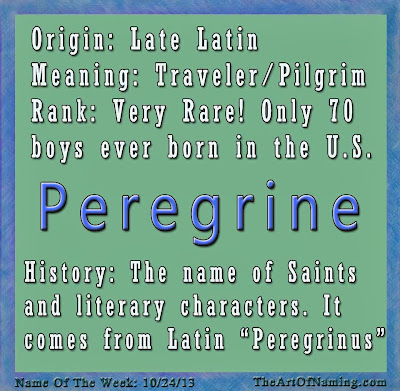 It was historically chosen as the name of the first English child born in America. The child, Peregrine White, was born on the Mayflower at what is known today as the Provincetown Harbor in Massachusetts. Interestingly, he had a brother named Resolved.

Peregrine is also the name of several early saints, most notably Saint Peregrine Laziosi, the Patron Saint of Cancer Patients. The name comes from the Late Latin name Peregrinus which means "traveler" and more recently "pilgrim". The Italian form of the name is Pellegrino which you may recognize as a brand of mineral water, San Pellegrino.

There is also a character in a novel by Tobias Smollett called Peregrine Pickle. And you can't forget little Peregrin Took, a hobbit from "The Lord of the Rings" series, also known as Pippin.  Pippin or Pip are darling nicknames for Peregrine, and there is also Perry.

Clearly, Peregrine has history behind it from Saints to fictional characters to pilgrims. Statistically in the US, Peregrine has only been in use since 1998 with a total of 70 baby boys ever given the name, the most being in 2010 with 12 births. There have also been 12 girls given the name but it is solely considered a male name.

I would pair a traditional or classic name with Peregrine to balance out the rarity. What would you pair with the name and what do you think of it? Let me know!

P.S.  I have edited all of the previously featured names and added the above sibling and middle name categories for each of them!  Take a look!
Written by The Art of Naming at 8:00 AM