Popular 1880s Boy Names That Should Be Used Again Today 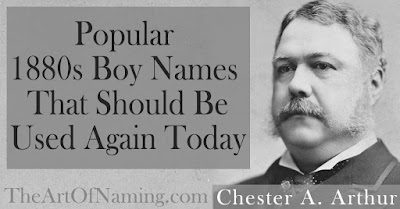 Many of today's most-popular boy names have actually been rather popular for decades. The same few traditional choices have stuck around and lasted the test of time moreso than many of the popular female names have.

While looking at the Top 200 Names of the 1880s via the Social Security Administration's data, it is no surprise that the hottest names of the decade include John, William, James, George, and Charles. While John, George and Charles have declined in usage, James and William still dominate the modern charts.

How many interesting names from the 1880s could be revived and given to modern boys? In order to find these names, we will need to skip over the evergreen names that are still ranking well in 2014. We aren't interested in those right now. We want to find the names that have fallen from favor, names like Clarence or Earnest that were once well-used.

2. Claude #52 - This name has the same popularity pattern as Ralph. It peaked around 1920 and again around 1947 only to fade way down to only 42 male births in 2014. Claude could be favored as a future vintage revival but at the moment, neither Claude nor Claud are being used much.

3. Chester #65 - This was the first name of the 21st US President, Chester A. Arthur who was in office during this time period from 1881 to 1885. This name was well used for many years, peaking in 1920 and 1946 before tapering off. There were only 83 boys named Chester in 2014. It is hard to tell if this name could be fashionable again in the coming years but it certainly deserves more usage.

4. Luther #68 - This is a big name with a few notable bearers that was most popular in 1922 with 1,477 births. After that, it declined in usage all the way down to just 96 births in 2014. This name is a good candidate for being revived again along with other vintage boy names.

5. Leroy #96 - The name Leroy flourished from the early 1900s through the 1960s in the US but started declining in popularity after that. It straddles the line between being a part of the Top 1000 names and not. As of 2014, with only 183 male births, it was not. However, it does have the potential to climb the charts again.


7. Otis #135 - With some recent usage in Hollywood, Otis is starting to gain popularity again today but it is still a few spots shy of the Top 1000. With 202 births in 2014, this name seems to have a good chance of climbing the charts in the coming years.

10. Irving #196 - Irving had a major popularity peak from 1914-1927 but rapidly descended the charts again as quickly as it first ascended. It had another small boost in usage in the late 1980s and early 1990s. As of 2014, Irving was only giving to 113 boys. As one of the more attractive I-Names for boys, Irving deserves to shake its old-fashioned image and be cool again, especially with that fashionable letter V in the middle.

Here's more of the Top 200 names from 1880 that do not rank within 2014's Top 1000:
Do any of these names strike your fancy or do they deserve to remain unused? Which could you most realistically see on a modern boy?

Photo Credit: By Charles Milton Bell 1849–1893 [Public domain or Public domain], via Wikimedia Commons
Written by The Art of Naming at 6:00 AM