Taken straight from our list of names that end with the letters -dy, is the lovely Melody. 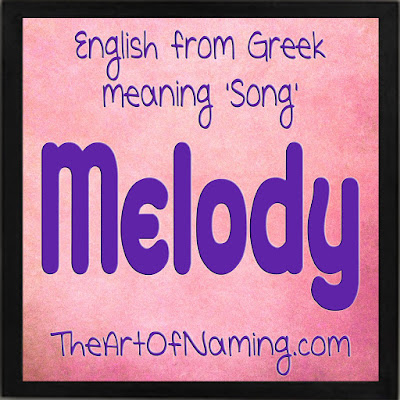 This name is also an English word with which you're no doubt already familiar. Melody is derived from the Greek melos meaning "song" and combined with aeido meaning "to sing", which forms the name Melodia. Via Late Latin and Old French, you get the name Mélodie. After that, it winds up as the English word and name Melody.  Google defines it as "mel·o·dy -ˈmelədē. noun: a sequence of single notes that is musically satisfying."

Could this name continue to linger within the Top 200 or could it eventually break into the Top 100 for the first time? What do you think of Melody?

If this is a name you are pondering for a daughter, here are some middle name ideas and sibling name ideas that all go nicely together:

Melody is a bit difficult to pair with. Which names would you choose?
Written by The Art of Naming at 1:01 PM