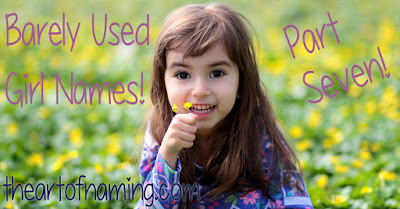 Congratulations on the little girl you're expecting in the near to distant future!  I couldn't be happier for you!  Not pregnant? No problem.

If you're looking for an unusual name for a book character, pet, or simulated video game character, I'm happy that you've also stumbled across this page.

Below are ten interesting names that have either had their heyday in your grandparents era, or have never quite taken off.  Either way, these names deserve consideration if you're into the uncommon. Go on, browse a bit, then be sure to check out the other six parts of this series for even more ideas!

Damaris (161 births - #1,428) Damaris was a woman in the New Testament who was converted to Christianity by Saint Paul. It is a Greek name from the word δαμαλις (damalis) which possibly means "calf, heifer, girl". The meaning is a little unusual but the biblical association makes up for it. Damaris has been used for girls in the US since 1916. It also gained minimal usage for boys in 1969. The year with the most female births was 2006, which ranked it at #604 for the year. However, it dropped out of the Top 1000 in 2012. Will it regain some usage in the future? Middle Name Ideas: Damaris Magdalene, Damaris Lily, Damaris Elaine, Damaris Sophia, Damaris June, Damaris Ruth, Damaris Lucille

Azul (160 births - #1,430) Pronounced ah-zhool, Azul is the Spanish word for "blue". This name should gain some popularity for being a triple threat. It's a color, it contains the cool letter Z, and it has that Spanish flair.  It's only been around since 1995 in the US. Interestingly, this name spiked in popularity for 4 years (2007-2010) before dropping off the chart again. Could you see it making a splash in the future? Middle Name Ideas: Azul Gabriella, Azul Rosalinda, Azul Carina, Azul Miranda, Azul Selena, Azul Olivia, Azul Victoria

Gretchen (160 births - #1,431) Gretchen is the German diminutive of Margareta, which of course is a form of Margaret, which comes from the Latin Margarita and the Greek margarites meaning "pearl." Gretchen has been in use in the US since 1882 and had the most births per year in 1971. It was almost always in the Top 1000 until it dropped off the chart in 2010. Has Gretchen's time run out, or could it ever be well-used again in the future?  Middle Name Ideas: Gretchen Adelaide, Gretchen Elise, Gretchen Rosalie, Gretchen Amelia, Gretchen Charlotte, Gretchen Louise, Gretchen Matilda

Ida (159 births - #1,439)  The name Ida comes from the Germanic element id, which refers to "work" or "labor". It was common in England after the Normans introduced it, but it greatly lost usage in the Middle Ages. It made a strong comeback in the 19th century after being used as the name of a heroine in a poem in 1847 by Alfred Lord Tennyson. Births-per-year peaked in 1918 for Ida in the US, but then usage declined until the name left the Top 1000 in 1987. Middle Name Ideas: Ida Genevieve, Ida Lorraine, Ida Delaney, Ida Julianne, Ida Charlotte, Ida Grace, Ida Madeline

Darlene (158 births - #1,443) Exactly as you might guess, Darlene comes from the English word darling, but the suffix -lene was substituted to make it more acceptable as a name. This name first appeared in the birth record in 1896 in the US for girls. It was even briefly applied to males from 1927-1976 and 7 births as recent as 1989. However, this name is better suited for females as evidenced by its peak in popularity in 1958 with over 8200 births for the year. Shortly thereafter, the name began a decline in usage that has yet to turn around. The name left the Top 1000 in 2003. Could you picture modern Darlenes?  Middle Name Ideas: Darlene Marianne, Darlene Elizabeth, Darlene Claire, Darlene Olivia, Darlene Rebecca, Darlene Johanna, Darlene Margot

Saoirse (158 births - #1,450) Pronounced SEER-sha, this beautiful Irish Gaelic name means "Freedom". It has ranked as high as #18 in Ireland in recent years, and #88 in Northern Ireland. However, its pronunciation has been deemed too difficult for many Americans, that is, until the name finally gained usage in 1993. With such a large percentage of the population hailing from Irish ancestors, like myself, I'd love to see more pure Irish names being used. Saoirse has never been in the Top 1000, but she is definitely gaining usage year-over-year. The name's familiarity is growing thanks to actress Saoirse Ronan's fame.  Middle Name Ideas: Saoirse Caroline, Saoirse Margaret, Saoirse Aoibheann, Saoirse Emily, Saoirse Lily, Saoirse Niamh, Saoirse Maeve

Alba (157 births - #1,452) Alba is actually two different names with different origins. One Alba comes from the male name Albus, an Ancient Roman name meaning "white" or "bright" in Latin.  The Second Alba is Germanic and is derived from the element alf meaning "elf". Lastly, Alba is also a word meaning "sunrise" or "dawn" in Italian, Spanish and Catalan. These two different names and a word have been confused over time. Whichever Alba you prefer, it has been in use overall in the US since the 1880s. It briefly ranked in the Top 1000 at the beginning of the century through to 1923, but it has mostly been very rare ever since. Middle Name Ideas: Alba Carolina, Alba Gloriana, Alba Juliana, Alba Violet, Alba Magdalene, Alba Raquel, Alba Maren

Tallulah (157 births - #1,457) Tallulah is a Native American name that is typically said to mean "leaping waters" in the Choctaw language but some argue that it actually means "town" in the Creek language . Perhaps both of them are accurate. This name is pronounced tə-LOO-lə. There's also an Irish Talulla which is a different name with its own meaning. This name appeared on the US birth record back in 1917, but it was very seldom used over the years, including none at all between 1957 and 1978.  By 1995 though, Tallulah picked up steam and is inching toward the Top 1000. Will she make it? Middle Name Ideas: Tallulah Belle, Tallulah Jane, Tallulah Noelle, Tallulah Scarlett, Tallulah Vivienne, Tallulah Nayeli, Tallulah Itzel

Essence (156 births - #1,460) This name is relative to the word essence, which is derived from the Latin esse meaning "to be". It also refers to an odor or scent, or it could mean a "fundamental quality".  This word name is a guilty pleasure for me. I find it delightful as an unexpected middle name. It had not been used at all in the US, though, until 1973. It moved fast enough to earn a spot in the Top 1000 by 1991 and it continued climbing as high as #490 in 1995. It faded downward again after that, leaving the chart by 2009, but it is a name that I'd like to see used more often.  Middle Name Ideas:  Essence Aurora, Essence Briar, Essence Josephine, Essence Penelope, Essence Lavinia, Essence Juliet, Essence Kate

Winifred (156 births - #1,467) From the Welsh name Gwenfrewi, Winifred is derived from the elements gwen meaning "white, fair, blessed", and frewi meaning "reconciliation, peace". Winifred has been in use for American girls since the 1880s but it was also occasionally given to boys from the early 1900s through the 1970s. For girls, Winifred's biggest year was 1918 when 1,593 girls were named. It declined thereafter, leaving the Top 1000 in 1965. However, the last few years have shown an increase in usage of the name. Is it vintage enough to make a comeback though? Middle Name Ideas:  Winifred Margaret, Winifred Louise, Winifred Adele, Winifred Alice, Winifred Grace, Winifred Sophia, Winifred Esme

What do you think of these ten, barely-used names for girls? Which do you think stand the best chance of revival? Which should stay uncommon? Share your thoughts in the comments or on social media! Thanks for reading!
Written by The Art of Naming at 3:30 AM