The baby name Dagny is our featured name, taken from our list of names ending with the letters "-ny". 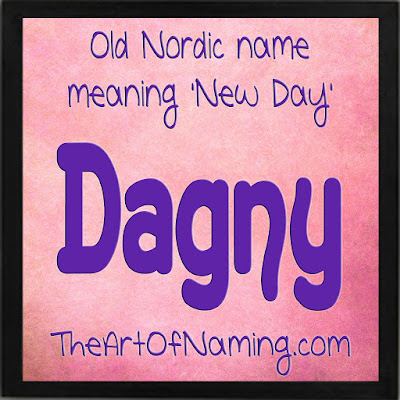 Dagny is an Old Norse name for females. It comes from Dagný, which was derived from the elements dagr meaning "day" and ný meaning "new". If you ask me, "new day" is an adorable meaning, and it would be especially sentimental on a rainbow baby. It is often used in Scandinavian countries, including Iceland, Sweden, Norway and Denmark.  Another form includes the Latvian Dagnija.

This name first appeared on record in the US in 1893. It has never had significant popularity and it has never been commonly used. If you're looking for a truly rare name, Dagny is a safe bet.  The most births in a single year that were earned by Dagny is 80 in 2013, which is its highest popularity peak on record. There were only 37 girls named Dagny in 2016.

This name has never ranked within the Top 1000 in the US. It did rank in Iceland in 2007 at #75. It isn't always easy to find statistics like this, but I did find an interesting site saying that 2,053 women have Dagny as a main first name in Sweden. It also says a total of 5,185 woman have it as a first name. I'm not sure how they define the difference between a "main first" name and just a "first" name, but you can see the information here yourself.

That site also indicates that the median age for persons named Dagny is 76, so it may be more on the old fashioned side than the modern. However, it could be viewed as an interesting, bold and refreshing choice on a modern American girl. Besides, Norse names are unique enough to be hip. Perhaps Dagny could become trendy in the future. What do you think of it?

Are you a fan of Nordic names? I know that I am. If you'd consider the name Dagny, here are some ideas for sibling names and middle names to complement it:

What do you think of the Nordic name Dagny? Would you use another Nordic name with it as a middle name or would you use something else like Dagny Rose or Kate Dagny?
Written by The Art of Naming at 3:30 AM