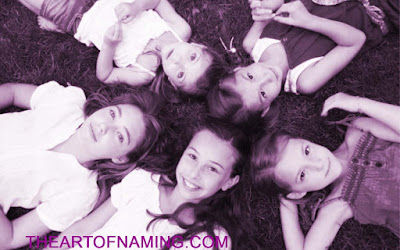 Creating a great first and middle name combination takes some practice. Some people have a very hard time with it and others are rather skilled at it! If you’d like to improve your naming skills, I thought I’d provide a few examples to show my step-by-step thought process for pairing two names together. Here is a list of names that work well together. You could either use these as inspiration or actually take and use them for your child.

This list of names is based on two specific styles that I like. The first names are all “ancient” names and the middles are more on the traditional, vintage side. I picked out five of my favorites to show you:

1. Amabel is a medieval name that has never caught on in modern times. Short form Mabel was popular in the 1880s and early 1900s but it is now considered a vintage name that is beginning to be revived again. Amabel is an obscure choice but it sounds similar enough to names like Annabelle and Arabella that it wouldn’t stand out as odd. With its three syllables and unique nature, I chose to pair it with the simple but lovely Grace. Grace is a virtue name and is very common for middle names these days so the popularity contrast provides balance to Amabel. Meaning-wise, Amabel means “loveable” which compliments the idea of grace in an attractive way. Amabel Grace is very balanced in many different ways which makes for a great first and middle name combination!

2. Sabrina dates back to the 12th century based on the Roman name for a river in Wales.  It has had 5 popularity spikes since the 1950s so it has been well used but it is currently not high on parents’ radars, ranking at a respectable #370 in 2016. It has three syllables which flows nicely with Ruby’s two syllables. Ruby is another vintage name that was popular about a hundred years ago and has come back into style today. Ruby currently ranks at #71 so they have a bit of a popularity contrast which is nice.  If you notice, both names have an R and a B. This is a personal preference. I think Sabrina Ruby as a combination ties together well because of this shared sound.

3.  Sibyl can also be spelled Sybil. Both names date back to Greek and Roman legend and they were popular in the Middle Ages too. I like Sibyl for being rather unheard of today. It hasn’t really been used at all in recent years for that spelling. Sybil is a bit more used but still only receives about 100 births per year. It is a lovely, two-syllable name that happens to pair beautifully with a longer traditional middle name. In this instance, I chose Josephine but I also debated using Margaret and Theodora.  Josephine is a feminine spin on the classic male name Joseph and it is considered a lovely vintage choice that’s making strides today. Sibyl Josephine as a whole is a strong and interesting girl name that isn’t overly feminine sounding.

4.  Viviana dates back to a saint and martyr in the 4th century. The name itself comes from the Late Roman name Vivianus meaning “alive”. It currently ranks at #444. I chose Viviana because of how long, flowy and feminine it is but to balance it out, I paired it with the one-syllable name Pearl. Pearl was well used from the 1880s to the 1940s but fell out of favor since then. Today it is starting to make a comeback, ranking back up at #567 in 2016. This combination of ancient and vintage works well since they’re both gaining popularity again as modern names. Viviana Pearl is a sweet, balanced combination suitable for a girl today.

5. Francesca is the Italian form of the Latin Franciscus. The entire family tree of Franc- names is very internationally used. Because of associations with saints, these names have been well-used since at least the 13th century. Francesca is such a long, traditional choice so I chose to pair it with the short, nature name Ivy. Francesca always gets a similar amount of births per year so it is neither gaining nor losing popularity. Vintage Ivy is actively gaining popularity again, doing even better today than it did in the early 1900s. Together, Francesca Ivy is a beautiful name that flows well and isn’t too popular or too obscure.

What do you think of these five combinations? How do you go about pairing names? Click below to view the article featuring five boy name combinations.