ALL ABOUT JOE! - March 27th is National Joe Day

March 27th is considered National Joe Day! From a "cup of Joe", to Sloppy Joes to the Average Joe; from Joe DiMaggio, to Joe Jonas, to Joe Biden, there are a ton of Joes to celebrate! So today we will take a closer look at Joseph, Josephine, Joe and other similar names. 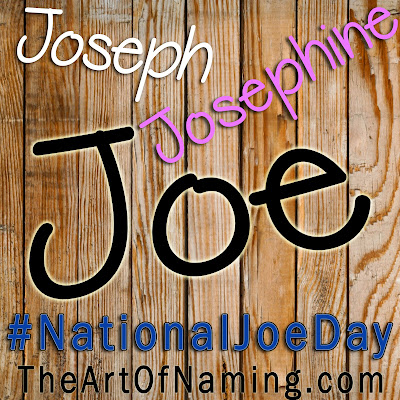 According to Behind the Name, Joseph comes from From Ioseph, the Latin form of the Greek Ιωσηφ (Ioseph), which was from the Hebrew name יוֹסֵף (Yosef) meaning "he will add". Since it his Hebrew in origin, of course it is a biblical name. In the Old Testament, Joseph was the son of Jacob and Rachel.

Joseph is one of those names that translate well across a variety of languages and cultures around the world:

There is also a handful of feminine forms of the name:

And you can't forget the diminutives and "nickname" options:

As you can see, the various translations are quite unique and interesting. I'm sure we have all known a Joseph/Joe, but have you ever known anyone with one of these other, more cultural names?

Now, Nameberry has quite an extensive list of famous Josephs. It is far too long to repost here, but I encourage you to take a look.

As far as popularity goes, Joseph has always ranked very well. It has never ranked lower than #22, which happened in 2011. It has ranked as high as #5!  It ranked at #20 in 2016 and will probably linger within the Top 100 for a very long time to come.

The lovely Josephine experienced a high popularity peak of 8,682 births in 1918. It declined after that, but is currently ticking upward. In 2016, there were 2,766 girls given the name which ranked it at #114 in the US.

If you're a Joe fan, here are some ideas for sibling names and middle names:

What do you think of these Joe names? Which would you choose? Have you already used one?
Written by The Art of Naming at 3:30 AM