I got this week's featured name from the list of Colonial names that I posted on Tuesday! It was apparently used back then but it sure is rare now!

There are many "Rose" names out there. Beyond just Rose, there are Rosa, Rosalie, Rosamund, Roseanne, Roselyn, Rosemary, Rosetta, Rosemarie, etc. I have never been a huge fan of any of these. And then I found Primrose.

It switches the "rose" to the end of the name and is an entirely different flower altogether than a rose, which I like! I'm one of those odd girls that do not like roses just because everyone else does. The primrose is very lovely, though, and comes in many colors!  (Don't let the name fool you! The Primrose flower comes from the family Primulaceae and is not closely related to the rose family Rosaceae.) 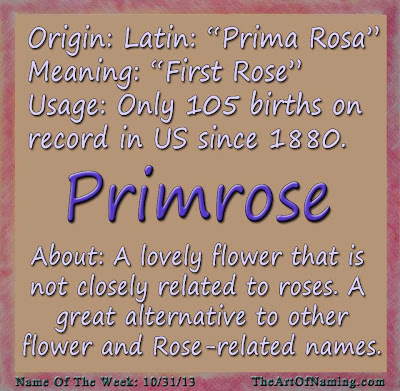 This name was originally used as a Scottish surname but it ultimately derives from the Latin "prima rosa" which means "first rose". And as its name indicates, it has the word "prim" in it which lends to the saying "prim and proper." Many people view this name as somewhat uppity but I think it is uniquely cool.

Primrose has been used in several British novels and TV series so it does have a British air about it that may not work as well in America. But despite the general vibe that it gives, it is definitely a bold and attractive choice! It is a great alternative to other popular flower names like Lily and Daisy and Rose itself!

The most recent Primrose that may be familiar today is the character Primrose "Prim" Everdeen in the Hunger Games trilogy, who is of course the younger sister of Katniss.  I think that it was that exact character that influenced the 16 births of girls named Primrose in 2012.

I would pair this name with something somewhat classic or traditional since it is a very unique choice. Something short and sweet!  What do you think of this name? What would you pair with it?

[Sidenote: I had to choose Primrose after I chose Peregrine last week. They are my two favorite P-names and they just sort of "go together" in my mind. I would love to meet boy/girl twins named Peregrine and Primrose! Both super unique and rare and nature related! Pip and Prim or Perry and Rosie.  Just my thoughts!]  :)

As a Middle Name:
Anna Primrose
Claire Primrose
Hester Primrose
Lydia Primrose
Tabitha Primrose
Written by The Art of Naming at 8:00 AM

Primrose is rising in the UK, so you're right this is a very British-style name.

Baby twins in a victorian era steampunk series by Gail Carriger were named Primrose and Percy!