The last piece in this week's World-Wide Wednesday segment on Welsh names is the lovely girl name Carys. 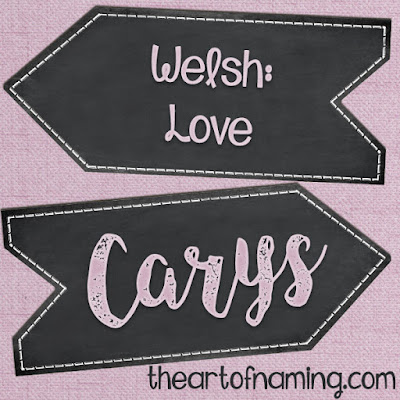 Pronounced ka-RISS or KAH-ris in Wales and sometimes CARE-iss in the US, it comes from the Welsh word caru which means "love". In the stream of time as far as names go, Carys is actually somewhat modern. It has only been in use since the middle of the 20th century in Wales. The most recent stats I can find rank the name at #239 in England/Wales.

Carys has only been used in the US since 1991. It never received more than 16 births in a year until it suddenly got a boost in 2003 with 106 births. The cause of this increase is most likely because of Welsh-born actress Catherine Zeta-Jones and her husband Michael Douglas choosing the name for their daughter in 2003.

Since 2003, the name has consistently continued to receive at least a hundred births per year but it hasn't had more than 200. In 2013, there were 122 girls given the name for a ranking of #1695. This name could also be spelled Cerys but that spelling is even less used, only on record since 1998 and never receiving more than 13 births in one year.

It has probably not gained more popularity in the US since it is a Welsh name with a not-so-common pronunciation. It will probably remain under the radar and dance in the #1000-#1500 range unless something else happens to boost it again. That means its a great, unusual choice if you're looking for something different.

Revision:  Carys ranked at #2788 in the US for a total of 61 births for 2016. Which means my prediction above was off. The name actually declined even more from 2013 to 2016. This still makes it a great option for parents who want a rare name.

What do you think of Carys? Here are some naming pairing ideas I came up with: