Around this time of year, America tends to reflect on our interesting origins as a country. One of the most popular tales revolves around the early settlers who arrived on the east coast in the 1600s.  The fourth Thursday in November is Thanksgiving, a national holiday that commemorates the thanksgiving that the Pilgrims held for barely surviving their first winter in 1621. Tomorrow, this holiday will be observed by many.

The Puritans were a quirky group of English Protestants who settled mostly in the Boston area. There were about 10 Massachusetts Bay Puritan settlers to every 1 Pilgrim from Plymouth but they ended up merging together around 1691. While these two groups were initially very different, they and their descendants together form the popular image of America's early settlers that most people think about on Thanksgiving. 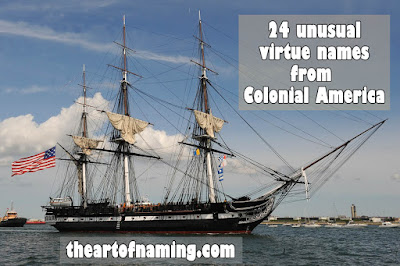 Let's take a moment to look back at some of the unusual names that popped up in Colonial America. Most of the common names were traditional ones such as John, William, Richard, Mary, Jane and Elizabeth but the Puritans also favored Old Testament names, virtue names and phrase names like Fear-Not or Safe-on-High.

In 2013, The Art of Naming listed many of the biblical and virtue names used by the first settlers.  In 2014, we took a closer look at 10 of the best Old Testament names that they favored.

Today, we are going to take a closer look at 24 virtue names for girls and boys that were sometimes used.  While a bit unusual, some of these names could potentially work on a modern child, but you may need to be a bold namer to follow through with it.

If you're not so bold, many virtue names would work well in the middle name spot, assuming you enjoy the message they send which will also be listed below. Many of the more common virtue names are very popular as middle names today such as Grace, Hope, Faith and Joy. Below are the less-common and even rare options:


Amity - /ˈamitē/ - noun: "a friendly relationship."  Derived from the Latin word amicitia. As a name, Amity may have had usage in colonial times, but it lost favor thereafter. It was not ranked in the US until 1960.* In 2014, there were 27 female births.

Charity - /ˈCHerədē/ - noun: "the voluntary giving of help, typically in the form of money, to those in need." Derived from Late Latin caritas meaning "generous love" which came from the Latin carus "dear, beloved". As a name, Charity peaked in popularity in 1974 with 1,408 births for the year. Currently the name fell out of the Top 1000 with only 243 births in 2014.

Clarity - /ˈklerədē/ - noun: "the quality of being clear, of being intelligible or of being easy to see or hear." Derived from the Latin clarus which means "clear". As a name, Clarity has only been used regularly since 1997 in the US. In 2014, there was a high of 63 births but it does not rank within the Top 1000.

Desire  - /dəˈzī(ə)r/ - noun: "a strong feeling of wanting to have something or wishing for something to happen." The name Desire was derived from the Latin desidero meaning "to wish for, to desire", but it was first used by the Puritans probably with the intended meaning of "desire the Lord". After that, it wasn't used again in the US until 1955 and remains rare with only 73 births in 2014.

Fidelity - /fəˈdelədē/ - noun: "faithfulness to a person, cause, or belief, demonstrated by continuing loyalty and support." Fidelity comes from the Latin words fidelis or fidere meaning "to trust".  This name has never been in recorded usage for girls since 1880, however the male name Fidel has been a rare constant since 1892.

Modesty - /ˈmädəstē/ - noun: "the quality or state of being unassuming or moderate in the estimation of one's abilities. Behavior, manner, or appearance intended to avoid impropriety or indecency." As a name, Modesty comes from the Latin word modestus and modus meaning "measure." It popped up once or twice in the 1960s, 1970s and 1980s but it gained regular yearly usage at the start of the 1990s. Never popular however, Modesty was given to 15 girls in 2014.

Patience - /ˈpāSHəns/ - noun: "the capacity to accept or tolerate delay, trouble, or suffering without getting angry or upset."  Patience comes from the Latin words patientia and pati meaning "to suffer". This is one of the more well-used puritan names and has been on record since 1880. It hit a popularity high in 2006 with 507 births and a rank of #578. In 2014 it was down to 267 births and a #988 ranking.

Prudence - /ˈpro͞odns/ - noun: "the quality of being prudent; cautiousness." Prudence comes from Prudentia which is the feminine from the the male Latin name Prudentius, which comes from the word prudens meaning "good judgement". This name has been given to girls since 1880 in the US. There were 58 births in 2014.

Remember - /rəˈmembər/ - verb: "have in or be able to bring to one's mind an awareness of (someone or something that one has seen, known, or experienced in the past)." This name comes from the Latin word rememorārī which means "to call to mind" and comes from the word memor meaning "mindful." There are zero births on record in the US for the use of Remember as a name.

Silence - /ˈsīləns/ - noun: "complete absence of sound." verb - "cause to become silent; prohibit or prevent from speaking." As a puritan name, Silence was likely derived from the words of Saint Paul: "Let the women learn in silence with all subjection". On the US birth record, this name only appears once. In 2005 there were 9 girls named Silence.

Temperance - /ˈtemp(ə)rəns/ - noun: "abstinence from alcoholic drink. Moderation or self-restraint, especially in eating and drinking".  This name wasn't used in the US until 1972. It has increased since 2006, likely influenced by the main character from the TV show Bones. It ranked at #854 in 2014 with 320 births.

Verity - /ˈveritē/ - noun: "a true principle or belief, especially one of fundamental importance. Truth." Verity has recently ranked at #344 in England and Wales. However in the US, it's very rare. It dates back to 1966 but it has never been popular. There were only 59 births for girls in 2014.


Assurance - /əˈSHo͝orəns/ - noun: "a positive declaration intended to give confidence; a promise." For the puritans, this name likely refers to the promises made by God in the bible.  Since 1880, Assurance has never been given to at least 5 children in one year.

Constant - /känstənt/ - adjective: "occurring continuously over a period of time." The puritans used Constant as a name based on its definition, but it also comes from the Late Latin name Constans meaning "constant or steadfast".  This name was used the most between 1911 and 1951. It hasn't been given to at least 5 boys since 1995. Constantine would be a nice alternative.

Experience - /ˌikˈspirēəns/ - noun: "practical contact with and observation of facts or events." From the Latin words experientia and experīrī meaning "to try, test".  As a name, it has never actually been given to boys in the modern US. It could be interesting in the middle name spot.

Increase - /ˈinkrēs/ - noun: "an instance of growing or making greater." The puritans used this name to refer to the biblical command of increasing in number. Neither the name Increased nor Increase are on record in the US for usage for boys.

Lament - /ləˈment/ - noun: "a passionate expression of grief or sorrow." The puritans tended to give this name only to the bastard children since its meaning refers to being sorry for sin. It's not surprising that this name has never been on record in the US.

Noble - /ˈnōbəl/ - adjective: "having or showing fine personal qualities or high moral principles and ideals." Noble has been used as a name for boys and girls, but it is most popular for boys. In 1920, there was a peak of 196 births for a ranking of #427. This is the one virtue name for boys that has decent usage and is currently re-climbing the charts. There were 129 births in 2014 for boys.

Reason - /ˈrēzən/ - noun: "the power of the mind to think, understand, and form judgments by a process of logic."  Reason popped up as a name a few times around 1920 but it hadn't been heard from much until recently. It landed on record for the first time in 75 years in 2000 and has had a handful of births since then, including 8 male births and 5 female births in 2014.

Repentance - / rəˈpentəns/ - noun: "the action of repenting; sincere regret or remorse." Much like the name Lament, Repentance was mostly given to bastard children. Both would be heavy names to live with since they refer to feeling sorry for sins that were not even the child's fault. Clearly this isn't a name that's freely given to modern American children now.

Resolved - /riˈzälvd,-ˈzôlvd/ - adjective: "firmly determined to do something." Resolved was the name of the big brother of Peregrine White who was born on the Mayflower in Cape Cod Harbor, making him the first European born to the Pilgrims in America. Since then, the name Resolved has not been in use on record in the US.

Steadfast - /ˈstedˌfast/ - adjective: "resolutely or dutifully firm and unwavering." This name referred to God's steadfastness as well as one's own steadfastness in their faith. It hasn't been used as a name on record in the US after 1880.

Truth - /tro͞oTH/ - noun: "the quality or state of being true." Truth was given to girls here and there around 1920 but fell dormant until the mid 1990s. It has been in regular usage for both genders since then. There were 35 boys named Truth in 2014 and 24 girls.

-
What do you think of these odd but fascinating names? Are there any that you would like to see revived? Would they work better for a middle name or are you bold enough to make one of these a first name? Have you known someone with one of these names? Share your thoughts in the comments below!

Learn more about the differences between Puritans and Pilgrims here.

*As a general note for those unaware, the United States Social Security Administration began recording the usage of names starting in 1880. Usage prior to that is harder to track down. The SSA will not list a name unless it has had at least 5 births in a single year.  If a name only had 3 births in a year, we would never know that the name was used at that time. The data in this article reflects the number of births per year from 1880-2014. When "rank" is mentioned, that refers to popularity. For example, if a name ranks at #498, it is the 498th most popular name for that year.
Written by The Art of Naming at 6:30 AM