Taken from the list of The Very Best S Names for Boys and Girls is the interesting masculine name Soren. Let's learn more about it. 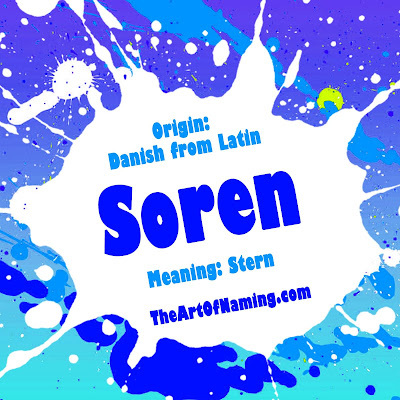 Soren is a Scandinavian name that's starting to catch on with American parents today. There are three different ways to spell Soren. First, there's just the anglicized Soren which is typically pronounced Sorr-en.

If you venture into Scandinavia, there's also the Danish and Norwegian form the name spelled Søren and pronounced more like SUU-ren. Derived from that is the form that the Swedes and Germans tend to prefer: Sören, also pronounced SUU-ren or ZUU-ren.

No matter how it is accented, the name originally comes from Severinus which is a Roman family name derived from Severus meaning "stern" in Latin.

This name has been well-used in Denmark. Just take a look at the long list of mostly Danish famous people on Nameberry.  What about its popularity in America?

There were also 20 female births in 2014. Soren gained usage for girls in 1994. While it is still far from being considered truly unisex, which gender do you prefer it on?

If Soren is a name that you're considering, here are some middle name ideas and sibling name ideas:

What do you think of the name Soren? What middle names would you pair with it?
Written by The Art of Naming at 6:30 AM