Based on this week's list of The Very Best R Names for Boys and Girls, I've chosen the vintage, gem name Ruby. 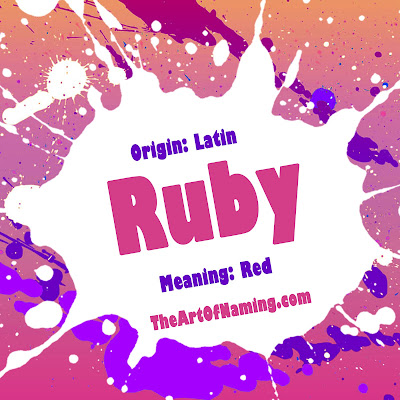 Ruby is derived from the Latin word ruber which means "red". As you might know, it is the name of a precious stone with a red hue that serves as the birthstone of the month of July. Along with other gem names, Ruby was first used as a name in the Victorian Era.

As a baby name, Ruby gained usage in the 19th century. It has been in use since name records were first kept in the US in 1880. Ruby was particularly well-used in the early 1900s, peaking from 1918-1924 with over eight thousand births each year. 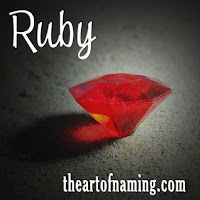 Vintage names like Ruby that were popular around 1920, declined in usage and then began climbing the charts again in recent years are fashionable now. There are many that follow this same pattern that's sometimes called the 100 Year Rule which basically states that once-popular names tend to come back in style after about 100 years have passed.

Currently, Ruby is on its way back up the charts. In 2014 there were 3,383 girls given the name for a rank of #90. It will no doubt keep inching upward and could very well get over eight thousand births in a year once again within the next 5-10 years. If this happens, Ruby will be an excellent example of a vintage name that follows the 100 Year Rule.

Ruby is beautiful, spunky, and interesting. While it worked so well for the older generation, it does work once again for modern girls.

If you'd like to contribute to Ruby's cause for gaining popularity, here are some ideas for middle names and sibling names:


What do you think of the name Ruby? What middle name would you pair with it?
Written by The Art of Naming at 6:30 AM