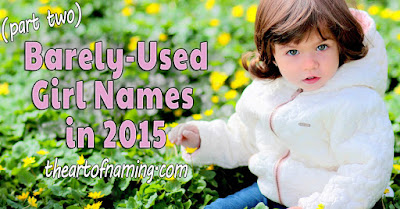 Welcome to part two of this series that features ten barely used names per month. We started this thing by investigating names just outside of the US Top 1000. We'll explore our way down the list and uncover more and more uncommon names as we go.

There are plenty of great names that are not currently popular. The best thing about their "unpopularity" is that it does not denote that there's something wrong with the names, they simply aren't on everyone's radar right now. They may have been used more in the past, or perhaps they are yet to be discovered. Either way, these great, overlooked names would be excellent choices for parents who want something you don't hear everyday.

The ones that I've handpicked from 2015's data are all very usable for a modern girl despite being uncommon at the moment.  In the parenthesis, the number of births for 2015 is listed, followed by the popularity rank as published by the Social Security Administration.

Taryn (247 births - #1062) According to Behind The Name, Taryn may have been created as recently as 1953. Actors Tyrone Power and Linda Christian gave this name to their daughter in that year, most likely as a feminine form of Tyrone. The data supports this. The name wasn't on record in the US until 1953. If that's really the case, then Taryn would have the same meaning as Tyrone which is derived from Irish Gaelic Tir Eoghain meaning "land of Eoghan". It's also possible that it is meant to be an alternate spelling to Terran, which refers to the earth or "terra". Taryn's best year to date was 1985. It only fell off the Top 1000 chart in 2015. Does it deserve the drop?

Ramona (242 births - #1076) Ramona is the feminine form of Ramón which is the Spanish form of Raymond. Raymond comes from the Germanic name Raginmund which ultimately means "advice" from the element ragin and "protector" from mund. Ramona spiked in popularity in 1928 in the US and continued to rank within the Top 1000 until 1989. Now it is on the outskirts of the charts with 242 births in 2015. Should it be allowed reentry?

Joelle (241 births - #1077) This is the feminine form of the Hebrew name Joel which means "YAHWEH is God". The US popularity record for Joelle shows 5 births in 1918 but it wasn't consistently used until 1933. It joined the Top 1000 in 1966 and dropped back out in 2004. It has lingered just beyond the charts since then. Could it rise in the future?

Gwyneth (236 births - #1091) Gwyneth is either a varient of the Welsh name Gwynedd, or it simply comes from the Welsh element gwyn meaning "white, fair, blessed". It has been well-used in Wales since the 19th century. Here in the US, it has only been used since 1915. Surprisingly, Gwyneth has only ranked with in the Top 1000 in the years 2004, 2011 and 2013. Will it ever be more commonly used here?

Magdalena (233 births - #1104) Magdalena is the Latinate form of Magdalene, which comes from a title meaning "of Magdala". The bible character Mary Magdalene was called this because she was from Magdala, a village on the Sea of Galilee whose name meant "tower" in Hebrew. She was a popular saint in the middle ages, giving the name Magdalene popularity. Magdalene ranked in the US Top 1000 from 1880-1944, but never again after that. Magdalena ranked well from 1880-2010, aside from a couple dips in the 1980s. Why is it that this name is beginning to fade? Could it regain usage?

Which of these ten names appeals to you the most? Would you ever consider putting it on your list? Do you know any children with these names?
Written by The Art of Naming at 6:30 AM