Today's featured boy name is pulled from the list of names ending with the letters -cy. 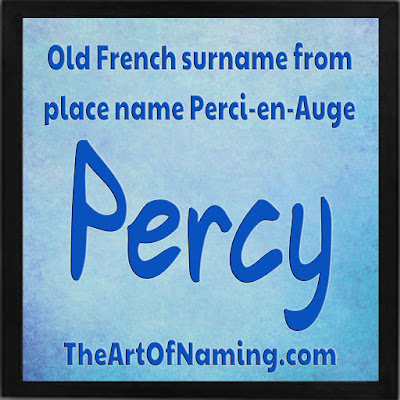 Percy is is male given name that comes from an English surname. There is a commune in Normandy in Northwestern France called Percy-en-Auge from which the surname was derived. The House of Percy (or Perci in Old French) was one of the most powerful noble families in northern England.

There are still members of the Percy family to this day who are Dukes of Northumberland. Their surname comes from the manor of Percy-en-Auge in Normandy which was their home during the Norman Conquest. The name Percy started out being used as a given name in their honor.

The Greek Perseus is similar in sound and could be assigned the nickname Percy. It means "to destroy" in Greek and was the name of a mythological hero who killed Medusa and founded the ancient city of Mycenae.

Percy can also be considered a short form of the name Percival. The name Perceval, with this spelling, was created by a French poet named Chrétien de Troyes in the 12th century. He wrote a poem called "Perceval, the Story of the Grail" in which Perceval was one of King Arthur's Knights of the Round Table.  It is likely that the name Perceval was based on the name of a Welsh hero, Peredur, which means "hard spears" in Welsh. Perceval may have also been influenced by the Old French words percer val meaning "to pierce the valley".

So what does Percy actually mean? Take your pick!  How about its usage?

What do you think of the name Percy? Would you consider it? If so, here are a few middle and sibling name ideas to help you out:

What would you pair with the name Percy? Or do you prefer Percival or Perseus?