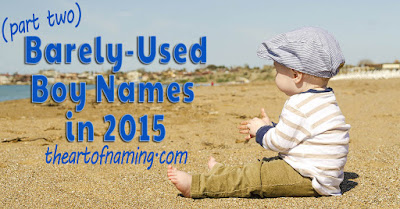 Welcome to part two of this series! Today we'll investigate ten interesting names that are currently not ranked within the US Top 1000. A couple were popular years ago and are uncommon now, while others have yet to hit their stride. Let's see if any of these could potentially start [re]climbing the charts in the coming years or if they are likely to remain barely-used. Share your thoughts in the comments below. Do you know any youngsters with these names?

Within the parenthesis, you'll find the number of births the name received in the year 2015, along with the names' corresponding popularity rank.

Denzel (186 births - #1060) Denzel is a form of Denzil which is a surname that indicated a person from the manor of Denzell in Cornwall. The spelling Denzel was made popular by Denzel Washington, an American actor. The name in the US has been around since 1906. It was rare until the early 1990s, peaking in 1993 at #311. It has since fallen off the Top 1000 chart.

Leif (186 births - #1063) This is an Old Norse name that comes from Leifr meaning "descendant, heir". The most famous bearer of this name is Leif Eriksson, a Norse explorer from the 11th century. As a name, Leif has been in use in the US since 1912. It ranked in the Top 1000 from 1959 to 1987. It is very close to rejoining the chart again, do you think it could ever be commonly used?

Roderick (185 births - #1066)  This name comes from  the Germanic elements hrod meaning "fame" and ric meaning power "power"; so it could mean "famous power". It was the name of a Visigoth King in the 8th century, but the name died out after the Middle Ages. It was revived again by Sir Walter Scott's 1811 poem called "The Vision of Don Roderick". It's always been used in the US and nearly always ranked within the Top 1000 until recently.

Lyle (183 births - #1072) Lyle is an English surname that is actually a bit of a play on words. It comes from the Norman French word l'isle which means "island" and is pronounced the same as Lyle.  The name as always been around in the US, perhaps being most popular in the 1920s. It fell off the Top 1000 chart in 1996, dipped down and is now back up on the outskirts. Could it rejoin soon?

Clarence (180 births - #1080)  Clarence derives from the Latin title Clarensis which may mean "clear, illustrious". This was a title used by the British royal family that comes from the name of the town of Clare in Suffolk. Clarence has always been used in the US, doing its best around 1920 and remaining a Top 100 name through the 1940s. It gradually fell, dropping out of the Top 1000 in 2009. Could it make a come back or will it continue to hover just below the charts?

Gerard (179 births - #1086) Gerard comes from the Germanic element ger meaning "spear" and hard meaning "brave, hardy". This name was often confused with similar-sounding name Gerald but it has never been nearly as popular. Gerard has been in use since 1886 in the US, but was never popular enough to rank higher than the 200s. It dropped out of the Top 1000 in the early 2000s. Could it be fashionable again in a couple decades?

Sidney (179 births - #1088) Sidney is a surname that also comes from place names in England that mean "wide island" based on the Old English sid meaning "wide" and eg meaning "island". Sidney could also be based on a town in Normandy called Saint Denis. Say that quickly with a French accent and there you go, but there isn't much evidence for this. In the US, Sidney has always been in use for both genders. And there's also the spelling, Sydney, which is popular for girls. Sidney ranked well for boys until it dropped out of the Top 1000 in 2014. Is Sydney's female influence too strong for Sidney to hold popularity for boys?

Aston (178 births - #1089) Aston could be derived from an Old English place name that means "east town"; or it could be a form of Æðelstan which is derived from the Old English elements æðel meaning "noble" and stan meaning "stone".  On record, Aston popped up in 7 different years between 1915 and 1930, each with a handful of births. It wasn't until the early 1980s that this name gained regular usage on boys. It is occasionally used on girls as well, but minimally. Aston has never been in the Top 1000 but it is inching awfully close. Could it be there in the next year or five?

Dale (177 births - #1092) Dale is a nature name and a surname that refers to a person who may have lived near a dale or valley. This name has always been in use in the US for both genders, but it's more commonly a male name. It peaked in 1958 at #46 and 8,478 births. It declined after that, falling off the Top 1000 chart in 2010. It's been lingering on the outskirts, could it ever make a comeback or is it still too recently dated to feel fresh?

Which of these names do you like best? Could any rise in popularity soon or are they better off where they are?
Written by The Art of Naming at 6:30 AM