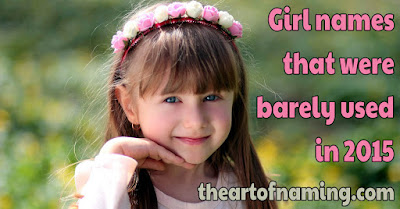 This is part three of our series that highlights names that rank below the Top 1000 in the US in 2015. That list is put together by the Social Security Administration every year based on the number of registered births throughout the country.

Since the names on this list don't rank, they are all great options for parents who don't want a super popular name. These would be unique enough to sound refreshing and might even guarantee that the child would be the only one with her name in her class. If you're tired of meeting dozens of Emmas and Sophias, check out the following:

3. Fallon (225 births in 2015 - #1125) Fallon is an Anglicization of the Irish surname Ó Fallamhain meaning "descendant of Fallamhan", with Fallamhan meaning "leader". It's interesting to note that it was poorly used for boys and started out strong in 1981 for girls with 232 births for the year. The name was taken straight from pop-culture. It was the name of a popular female character on the soap opera Dynasty which started in 1981. It left the Top 1000 in 1996. Could it return or does Jimmy Fallon make it too masculine and/or surnamey?

6. Marlowe (220 births in 2015 - #1146) Marlowe is a surname that is derived from the Old English place name meaning "remnants of a lake". Marlowe is a unisex name, having popped up for boys first in 1912. For girls it arrived in 1918 but it wasn't used as consistently. It gained more usage by 1967 and is now climbing the charts in the past decade. Both Marley and Harlow are in the Top 500 right now. Will Marlowe breach the Top 1000 soon?

7. Elodie (215 births in 2015 - #1167) The French Élodie comes from the name Alodia which is possibly derived from the Germanic elements alja meaning "foreign" and aud meaning "wealth". The fact that Elodie ranks down below the Top 1000 is somewhat surprising. It is one of those names often discussed around the baby naming community as suggestions. Perhaps parents aren't actually following that advice though. The name has almost always been used in the US but there were periods of time, like the 1970s-1980s, where the name was unheard of. This decade, it is gaining steam. Births per year more than doubled from 2007 to 2011, and nearly doubled again by 2015. Will she be popular soon?

8. Katrina (215 births in 2015 - 1168) Katrina is a variant of the Gaelic name Catriona which is a form of Katherine. That is said to come from the Greek Aikaterine, and it is said to mean "pure" but its origins aren't entirely clear. I detailed that in the past here.  In the US, Katrina has been used since 1895. Its best year was 1980 with 3,397 births for the year. Despite being a beautiful name, Katrina may always be associated with the disastrous hurricane that hit the US in 2005. The number of births per year declined between 2005 and 2006, and the name left the Top 1000 by 2011.

9. Florence (214 births in 2015- 1173) Florence comes from the Latin feminine name Florentia, which came from the male Florentius and florens which means "flourishing". Florence is a city in Italy, and it was the name of a British nurse who founded modern nursing, Florence Nightingale. In the US, Florence ranked very well up until it began declining in usage in the 1960s. It was within the Top 10 and Top 100 for a very long time but it received the most births per year between 1915 and 1922.  It left the Top 1000 in 1982. In just the last 4 years, Florence has gained some momentum. Will she be a Top 1000 name again soon?


Which of these 10 names would you most like to see being commonly used on modern girls?
Written by The Art of Naming at 6:30 AM