Our "Fan of the Week" Kiira chose a super cool girl's name straight out of Norse Mythology. Love it! The name is Eir. 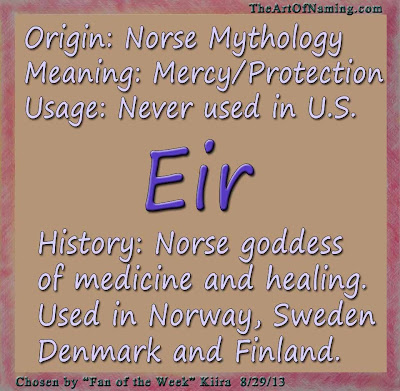 Eir was a Norse goddess of healing and medicine. The name means "mercy" or "protection, help" in Old Norse. If you're wondering how it is pronounced, you can listen to it here.  To my ear, this Icelandic pronunciation almost sounds like "ayvf."  I've also heard it said sort of like "air" on a character in the video game "Guild Wars 2," Eir Stegalkin.

No matter how you may pronounce it, this name is rare. And I mean RARE. Upon researching the number of births that Eir has had in the US, well, the results came back "No matches were found."

Aha! Nobody in the States has ever used this name. Well, at least not the minimum requisite of 5 babies per year in order to be recorded.

Despite these statistics, there's actually quite a bit of information on the name on Wikipedia, which mentions poetry and prose. Read it if you'd like!

What about the popularity of the name in other countries? The earliest this name has been traced back to is 1917 in Norway.  The most recent information I could find on the number of births per year with the name Eir was in 2009 and it goes like this:

In Finland, records show that there have been less than 25 males and less than 25 females who have ever had the name since 1899. Interesting!

Eir is definitely a rare name all around. While I love the idea of it, I'm pretty sure it won't work very well on a modern American child, but only because of pronunciation issues. It is definitely cool and unique otherwise.

However, another form of Eir that is potentially used in Norway and Sweden is Eira. You can hear the pronunciation of it here. It is a little easier to say and I think its slightly prettier because of the fashionable -a ending. It sounds like "eye-ir-ah" to me but with some rolling of the sounds that I'm not sure how to describe in written word. Just go listen to it! :)

What do you think of this "buried treasure" of a name? Do you have any guilty pleasure names that you totally love but will probably never use? I think Eir is on my list now.