The masculine name Clark originally comes from the Old English word clerec which actually referred to a priest. Later it became an English surname that means "cleric" or "scribe". It could also refer to a clerk and is associated with the occupational name for a clergyman cleric in a religious setting. Because of these meanings, the name gives the impression of a good and intelligent man. 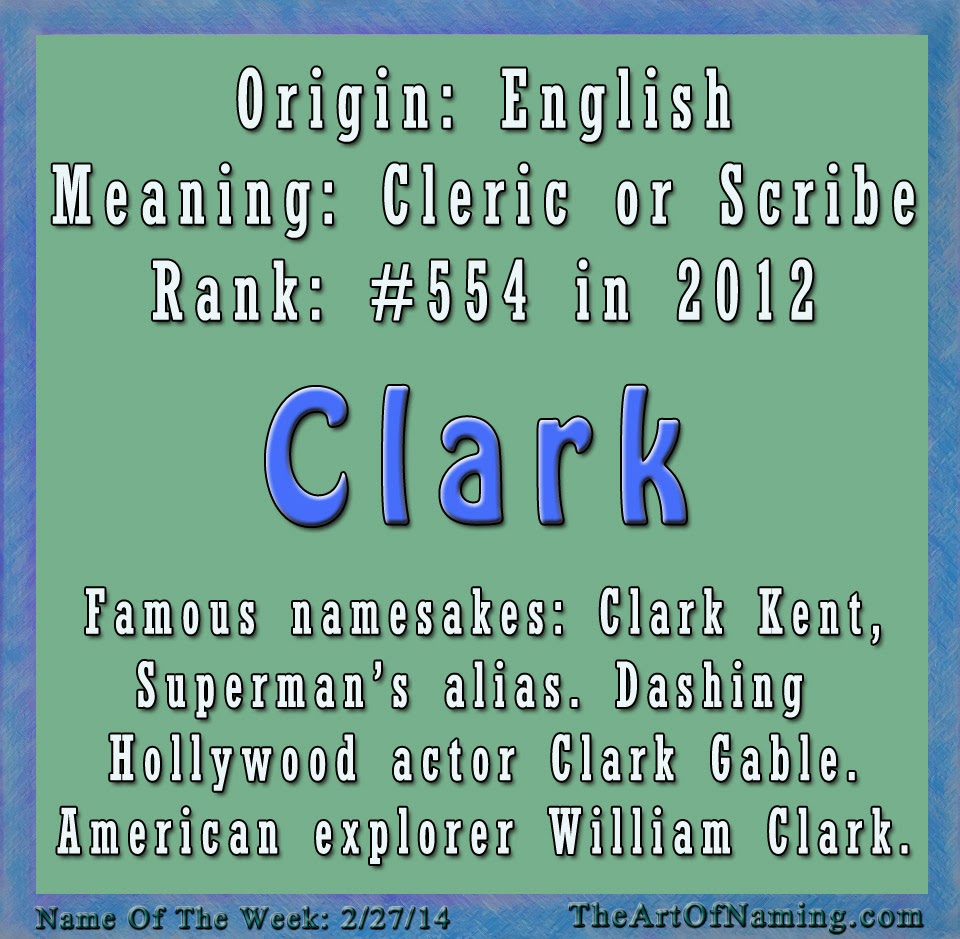 Famous Clarks include Superman's iconic alias Clark Kent who has been personified by numerous actors and voice talents since its comic book days. There's also Old Hollywood actor Clark Gable best known for his role as Rhett Butler in 1939's Gone with the Wind opposite Viven Leigh. Another association is the American explorer William Clark who helped lead the Lewis and Clark Expedition across America in the early 1800s. Between these three strong, handsome and adventurous namesakes, modern parents are starting to see the appeal of this short but powerful name.

The name Clark has been in regular use since 1880 in the US.  It got its first popularity boost around 1912 and gradually climbed higher and higher until hitting its peak in 1961. In that year, 877 boys were named Clark for a ranking of #268.
After that, the name saw a decline in usage. It has held steady in the lower half of the Top 1000 since then and is rising once again. In 2012, the name was used 467 times for a ranking of #554.

From the scholarly and religious meaning to the image of a seemingly ordinary reporter suddenly becoming "the man of steel" and flying through the sky, Clark is a winning name choice! Parents today seem to be flocking to the shorter names. The most commonly searched and viewed page on The Art of Naming is by far the One Syllable Boy's Names list. While this is just one little blog, it does suggest that short names are in whether they're being used in the first name spot or in the middle. What do you think of this "short name trend" theory? What do you think of the name Clark?

Clark is one of those names that works as a middle name for many names.  I would just avoid a first name that already has a strong C/K sound. Also make sure it is at least 2 syllables.  What would you pair with Clark?
Written by The Art of Naming at 7:00 AM