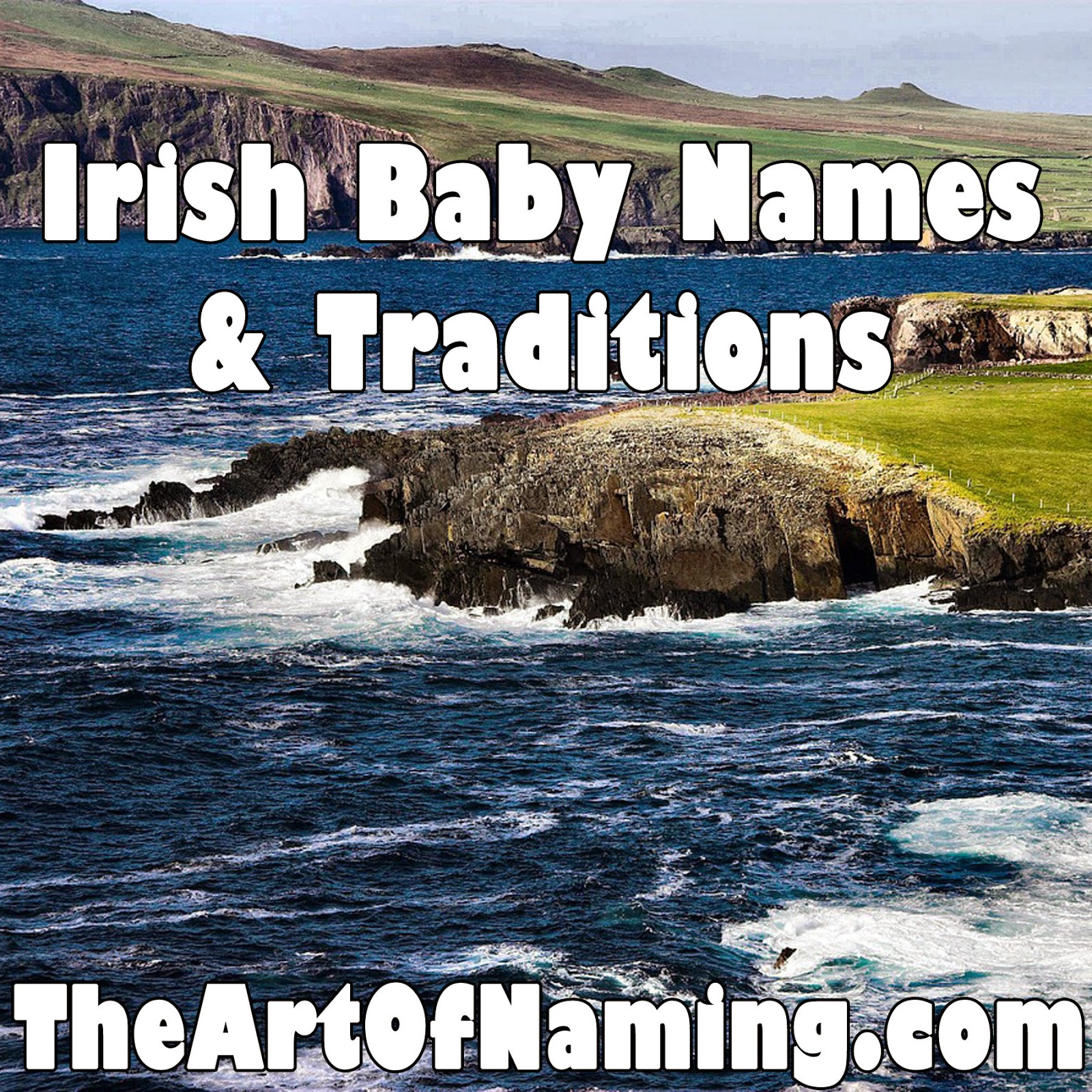 First, let's start with a bit of trivia.  Irish babies are typically named for their relatives, especially in the past. This trend may not be as prominent today as it once was, but there is a pattern that Irish families tended to follow:
Another fun tradition that is still carried out in recent years involves a "magic" handkerchief. On their wedding day, Irish brides are given a special white handkerchief to carry. When their first baby comes along, that handkerchief is turned into the baby's bonnet for their Christening.

The father's have traditions too. One called "Wetting the Baby's Head" is essentially a toast for the newborn's health and happiness. Traditionally, whiskey is used to commemorate the moment and is usually enjoyed by the father and his friends.

Other traditions may include placing a silver coin in the baby's hand during his Christening to ensure a prosperous life; and tying a red ribbon to the baby's cradle until their first birthday to keep away mischievous, baby-napping fairies. Of course, there's always plenty of Irish proverbs and blessings associated with pregnancy, childbirth and all the milestones a child will reach.

As far as actual baby names are concerned, a formal Irish personal name will consist of a given name and a surname. Irish surnames are rather patronymic and include O' meaning "grandson of" or Mac meaning "son of". A boy will usually have the same surname as his father. A girl's surname will replace the O' with Ni which indicates "daughter of the grandson of" or Nic which means "daughter of the son of".  A son of a man named Ó Dónaill would keep that surname, a daughter would be known as Ní Dhónaill. However, when it is anglicized, she would revert to the same name as her father and brother: Ó Dónaill.   There are other rules pertaining to a surname that begins with a vowel too; and sometimes the Normanic prefix Fitz will be used.

When a woman marries, she can opt to take her husband's surname but instead of keeping his O', she would replace it with Bean Uí which indicates "wife of the grandson of". Instead of Mac, she'd use Bean Mhic or "wife of the son of".  Bean may be omitted in certain cases allowing her to simply use Uí or Mhic. A woman marrying a man named Ó Dónaill may choose to be use Bean Uí Dhónaill or Uí Dhónaill as her surname.

In the case of first names, sometimes an adjective will be added to distinguish, for example, a son from his father like the English junior and senior. Mór ("big") and Óg ("young") are typically used in this case but instead of being placed at the end of a name, they'll be inserted between the given name and surname. So Seán Óg Ó Súilleabháin would be anglicized to "John O'Sullivan Jr." Sometimes the O' is dropped when it's been anglicized.  Other adjectives that could be applied to a person may simply indicate their hair color, but these are always informal like a nickname: Pádraig Rua ("red-haired Patrick"), Máire Bhán ("fair-haired Mary").

One more interesting possibility that I'll mention involves traditional Gaeltacht names in Irish-speaking areas.  They still customarily give a child a given name followed by his father's name and sometimes followed again by the paternal grandfather's name. For example: Seán Ó Cathasaigh (Sean O'Casey), son of Pól, son of Séamus, would be known as Seán Phóil Shéamuis. Sometimes a mother's name or a maternal grandfather's name could be substituted in there if they are well-known in the area. These types of names are not official but used more for distinguishing people who share a name and are living in the same area.

While most Irish people have a traditional Irish spelling for their name, many also opt to anglicize it, especially if they are somewhat famous. A fun example is that of former US President John Fitzgerald Kennedy. If he ever used it, his Irish name would be Seán Mac Gearailt Ó Cinnéide. He was born in the US but all four of his grandparents were the children of immigrants from Ireland.

Today, it isn't very clear how many people still strictly follow the familial naming patterns. The top names used on Irish babies in recent years seem to indicate that more parents prefer choosing a name that they love instead of adhering to traditions.

Names in 1963 were very traditional in an English sense. They're not traditional Irish names. The Top 5 looked like this:

Here is the current list of the Top baby names in Ireland for 2013:

Notice how many of the Top names were given to babies in 1963 compared to the number of births for each Top name in 2013. This indicates an increase in the pool of names being used in general. I imagine there has been a lot of influence from England and the US.  To view the entire Top 100 names, visit this page and view the tables at the very bottom.

There are still some traditional Irish names being given today, even though some of them are in forms that are a bit more anglicized than their original counterparts. Here are the ones within the Top 100:

What do you think of Irish traditions of the past? Are you familiar with more modern traditions in baby naming? If so, please share your insight in the comment section!  Which of the above names is your favorite?

[Note:] My paternal ancestors come from Ireland but I have never been there. I have, however, learned quite a bit of the language. If any of this information seems incorrect, please let me know!