From Juliet to Julius: The Popularity of 5 Jul- Names

In the naming world, sometimes you will find names that all begin with the same few letters. This can sometimes make it difficult to choose between them. For example, I asked which of these Jul- names you would sooner use and the results are in! 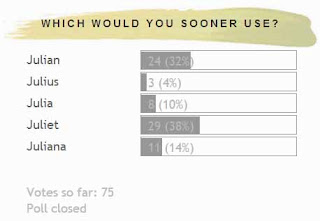 The options include two boys names: the popular Julian and the strong, Roman Julius. For girls, I limited it to sweet Julia, romantic Juliet and exotic Juliana.

Every single one of these names comes from the same root. They come from the Roman family name ioulos which is from the Greek ιουλος meaning "downy-bearded" which implies youthfulness. The patriarch name is Iulius from which Julius was born. Following Julius's lead came Iulia and Iulianus.

The boy names all sprang from Iulianus and include favorites such as Julian, Julius, Jules and Julio. There's also the Italian Giuliano and Giulio, the Russian Yulian, Yuliy and Yuli, the rare English name Jolyon, the Polish Juliusz and Julek, and any other variant or diminutive you can think of!


You can view the Jul- family tree here!

Here is how the names ranked in popularity on The Art of Naming's poll:
In the U.S. these names are all ranked within the Top 1000 names. Here is how they measured up in 2012:
Which of these Jul- names is your favorite? I personally love Juliet the most! I would also use Julius over Julian for a boy. What do you think?
Written by The Art of Naming at 7:30 AM