Inspired by our list of The Very Best T Names for Boys and Girls is the beautiful and unique name Tallulah. 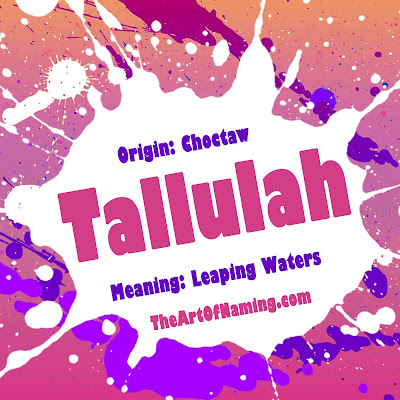 Tallulah is a Native American name but there is a bit of discrepancy about its true origin and meaning. It is typically said to mean "leaping waters" in the Choctaw language but some argue that it actually means "town" in the Creek language. Perhaps both of them are accurate. This name is pronounced tə-LOO-lə.

The alternative spelling Talulla is actually a different name. Talulla is Irish and comes from the Gaelic name Tailelaith. It is derived from the Irish elements tuile meaning "abundance" and flaith meaning "princess". There are two early Irish saints by the name Talulla.

Neither name is popular or even common. The Irish Talulla has only been given to 10 girls total according to the SSA's records: 5 births in 2011 and 5 in 2013 in the US.

As for Tallulah, the name has been on record since 1917 in the US but it was only occasionally used until 1956 when it took a hiatus. It regained usage in 1979 but it was still spotty until 1995. 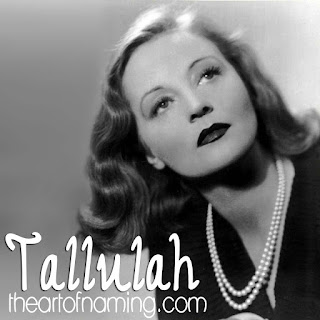 Now the name is gaining a following and climbing the charts. It has yet to rank within the Top 1000 names but with 139 female births in 2014, it is getting close. It also ranked recently at #265 in England and Wales.

As for famous namesakes, there was an American actress by the name of Tallulah Bankhead (1902-1968) who was named after her grandmother. Her grandmother may have been named after the beautiful waterfall at Tallulah Falls in Georgia.

Tallulah strikes an interesting chord as a name. Its Native American roots give it an earthy yet whimsical vibe, but it also seems sweet, sassy and elegant in other lights. This name seems rather versatile and definitely unique. If you're considering it, you could go many different directions when it comes to finding middle names and sibling names that would pair well. Here are a few ideas I came up with:

What would you pair with Tallulah? What do you think of it?
Written by The Art of Naming at 6:30 AM