Dexter is one of the many occupational surnames to have a popularity boost lately. This name means "one who dyes" in Old English. It is also related to the Latin word dexter which refers to right-handedness, or one who is skilled with their right hand. 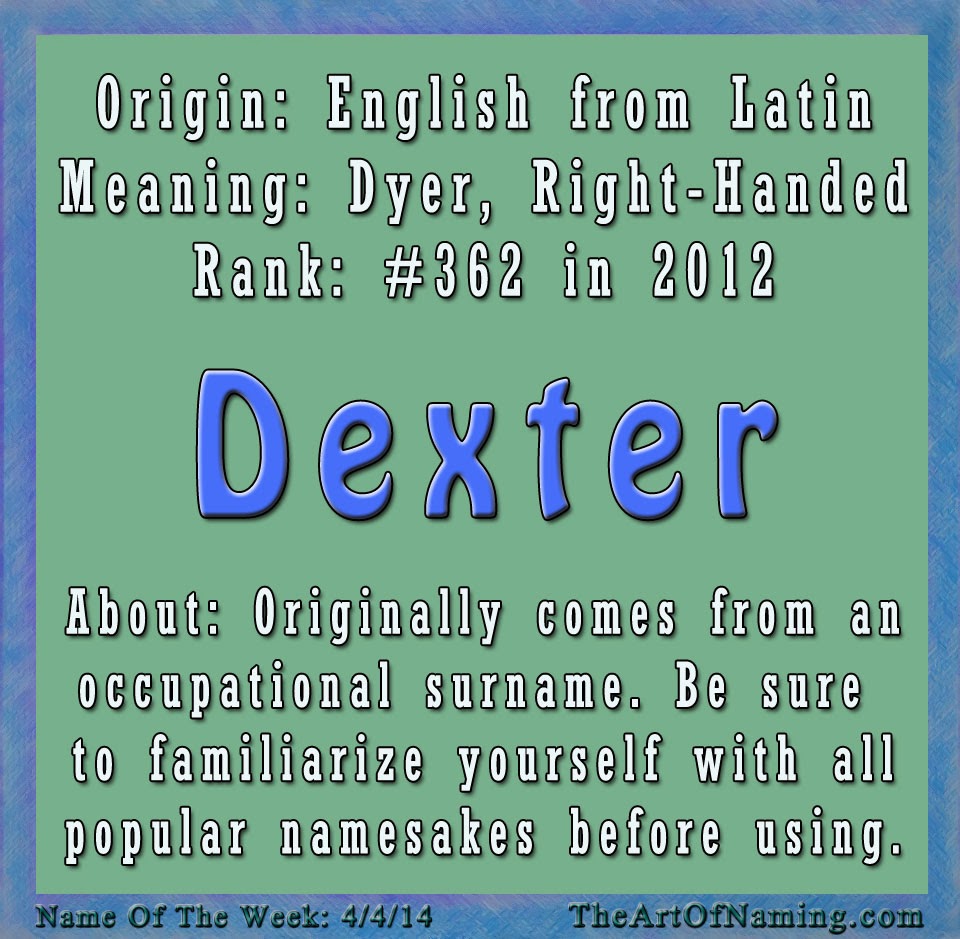 Nameberry gives a very good rundown of famous Dexters here. They say: "Over the years, it's been attached to a number of diverse real and fictional personalities--C. K. Dexter Haven, the witty Cary Grant character in The Philadelphia Story, Dexter Green, the protagonist of the Scott Fitzgerald story Winter Dreams, great jazz tenor saxophonist Dexter Gordon and--oops--the current TV Dexter, who just happens to be a genial but sociopathic serial killer."  As far as that last one goes, the TV show has now ended and most viewers were disappointed with the last couple seasons and hated the ending which means that it is quickly fading from their memories. It will be a strong association for a while but it shouldn't deter parents from using the name since he was rather likable despite his "profession".

As a baby name, Dexter has had its ups and downs in popularity. It has been in regular usage since records began in 1880. It started gaining steam in 1940 and slowly climbed upward. Its first peak was in 1968 when 761 boys were born. It promptly declined in usage again after that, falling to a mere 220 births in 1982. Then just as suddenly as it fell, it shot right back up to 688 births in 1989. And then, you guessed it, Dexter's usage declined again. 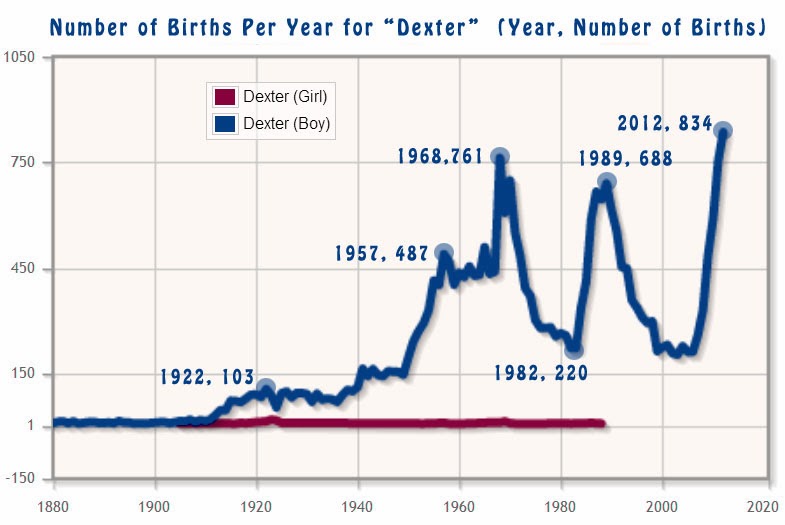 Around the turn of the century, this name was once again seeing the 200 births range. Something happened right around 2006-2007, though, that caused Dexter to have another spike in popularity.  It climbed nearly vertically and reached a record-high of 834 births in 2012. This put it at a ranking of #362.  Coincidentally or not, Dexter the TV show began in 2006.  Take from that what you will.

I chose to feature this name this week because of its bold letter X. Partly because of the cartoon, Dexter's Laboratory, this name has had a bit of a "nerdy" vibe to it. However, I feel like it is really coming into its own now. Nameberry describes it as "the jazzy, ultra-cool Dexter, like most names with Xs, has a lot of energy and sex appeal." So maybe the "nerdy" angle was just in my head. Either way, Dexter is definitely cool today. When shorted to Dex, he fits right in with other boys with the popular X-ending like Alex, Max, Jax, Felix, Knox, Maddox, etc.

What do you think of the name Dexter? Does the serial killer association ruin it for you? To me, it appears as though the show helped to boost the name. If it helps any, Dexter Morgan from the show Dexter only killed other murderers and those that he felt "deserved it" because of their own ugly crimes. He stuck to his code.  If that is still too much for you, perhaps you'd like names like Baxter or Braxton instead.  Let me know what your thoughts are!

If this is the name for you, here are some ideas for siblings and middle names: