Name of the Day: Augustus

Today's Name of the Day is the Latin boy's name Augustus. For years, this name was considered somewhat fusty, or even pretentious. Today, parents are seeing it differently.

Like my own son's name, Maximus, Augustus was originally a title meaning "Great," "Magnificent" or "Venerable." It was given to the first Roman Emperor, Octavius, who was the adopted son of Julius Caesar. He kept Augustus as his name.  The month of August was also named in honor of him. 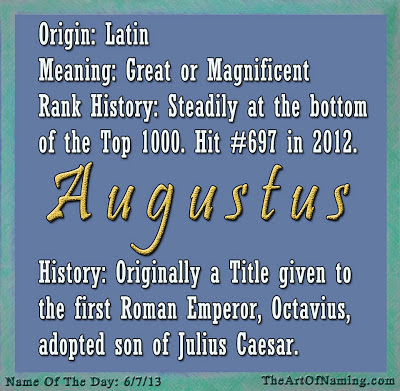 The number of babies given this name has gone down, up, down and way back up again over the years, starting in 1880 until now.

(Remember that the charts vary because of the population differences and the vast number of different names being considered today. The "number of babies given this name" charts give a better understanding of its usage. See below.)

What do you think of the name Augustus? I would love to use it myself but my husband is not a fan of "Gus" or that strong G sound. Also, we wouldn't want to have a Maximus and an Augustus, it's too much "-us" and we'd be trapped in a naming theme (Octavius, Tiberius, Septimus, where does it end?!)

I think this name is very handsome and I would recommend it to parents who want something masculine and strong for their little guy. In fact, most of these Latin "-us" type names are starting to catch on a bit with modern parents.

Would you ever consider this name? First name or middle name spot? Let me know your thoughts below!