Name of the Day: Isadora

Today's Name of the Day sounds like it should be popular but it actually is not.  For those parents who love the name Isabella but hate its popularity, have you ever considered the name Isadora? 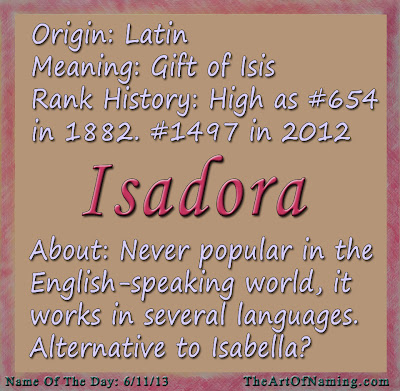 Last year, 2012, there were 148 little Isadora's born. The name just fell shy of ranking, coming in at #1497 which is the highest it has ranked since 1915.  In fact, Isadora wasn't used at all from 1958-1968.
So why does this name hardly get any attention when cousin-name Isabella is mega-popular? Perhaps parents just prefer the "Bella" nickname to that of a possible little "Dora." Or perhaps pop-culture influence really is strong, (i.e. Bella Swan vs Dora the Explorer.) Putting that aside, Isadora is a beautiful and unique name that sounds like it should be popular even though it isn't. (Win/Win?)

But, like Isabella who didn't rank at all on the Top 1000 chart from 1948-1990, Isadora has major potential to become something huge if parents are interested in "different but familiar." Isadora is Latin, meaning "gift of Isis" and has international appeal. It has been used in many languages such as Serbian, Macedonian, Spanish, Portuguese, Russian, Italian, English and Ancient Greek.

Isis was the Egyptian goddess of fertility and birth. The rest of the name comes from the Greek word δωρον (doron) meaning "gift." Male counterpart Isidore was historically popular with Jews who used it as an Americanized version of names like Isaac, Israel and Isaiah.

With more and more babies being named Isadora, do you think it will gain popularity? Would you use it as an alternative to Isabella? And do you like possible nicknames Issy, Isa or Dora?

Let me know the answers to these burning questions!